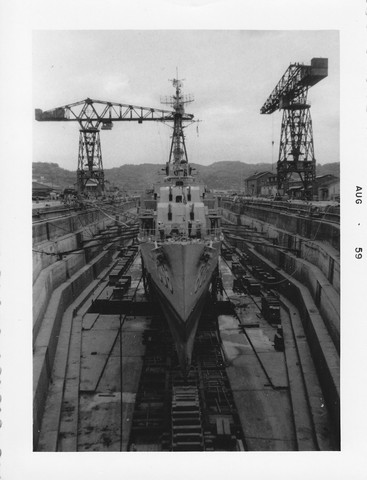 Final Disposition:Sunk as a target 15 October 1976

After shakedown off Cuba MacKenzie returned to Boston 15 September 1945 and subsequently participated in the Navy Day celebrations 27 October at Savannah Ga. She served with the Operational Development Force at Norfolk her home port and conducted training exercises and escort duties along the Atlantic seaboard until sailing 5 January 1948 on a goodwill tour to Buenos Aires Argentina.

MacKenzie returned to Norfolk 9 February after these duties as a "steel gray diplomat" and continued peacetime operations highlighted by a Midshipman cruise June to July 1948 to Portugal Italy North Africa and Cuba. In October 1948 the destroyer sailed for the Near East where she supported the United Nations Palestine Patrol and the allied occupation of Trieste returning to Newport for Christmas.

After overhaul at Boston until April 1949 George K. MacKenzie continued peacetime training on the eastern seaboard and made a "Med" cruise from January to May 1950. When the uneasy truce in the Far East was shattered by the North Korean aggression George K. MacKenzie was transferred to the Pacific. She arrived Pearl Harbor 1 July 1950 to prepare for wartime service.

During her first tour in Korea 26 July 1950 to 30 January 1951 she screened attack carriers during strikes on North Korean targeted and provided close support for advancing Allied armies. After a repair period at San Diego 15 February to 17 July 1951 she returned to perform the same vital screening and support duties until April 1952.

George K. MacKenzie provided antisubmarine screening and fired several important bombardment missions at Wonsan Harbor 16 to 17 January and again 23 February to 21 March 1953 in support of United Nations forces. She lent effective fire support to troops in the vicinity of Suwon Dan 15-19 April 1953 in company with Los Angeles and demolished sections of the enemy's railroad along the eastern coast of Korea in May.

Homeported in San Diego and Long Beach Calif. she completed a total of nine tours of duty in the Far East including training exercises and duty with the Taiwan patrol between 1953 and 1959.

George K. MacKenzie's homeport was changed to Yokosuka Japan 15 February 1960 as she continued her peacetime training duties visiting Hong Kong the Philippines and other Far Eastern ports including those in Japan. In 1961 George K. MacKenzie sailed from Subic Bay P.I. 23 March to rendezvous with carriers Midway and Lexington in the South China Sea to act during the Laos crisis as a powerful on-the-spot force if needed. Fortunately the crisis passed; and after further operations George K. MacKenzie put in at her new home port of New York 11 December 1962. She entered Brooklyn Navy Yard for modernization returning to sea in October 1963. George K. Mackenzie then made preparations to return to her new homeport of Long Beach Calif. where she arrived 28 January 1964 to prepare for extended duty in the Far East. She left the West Coast 26 May and reached Yokosuka Japan 13 June to begin over 2 years of continuous service in Oriental waters operating alternately in Japanese waters and off Vietnam fighting to repel Communist aggression. She specialized in screening aircraft carriers and shelling Communist positions ashore. The battle-tested destroyer returned to Long Beach 3 August 1966 for a major overhaul to prepare for future action. In mid-1967 she was again in the Far East aiding in the struggle to save Southeast Asia. On 29 July she was screening Forrestal (CVA-59) when fire broke out on the carrier's flight deck. After helping to put out the flames she escorted the stricken flattop to Subic Bay for repairs.


Add Your Name to the
DD-836 Crew Roster