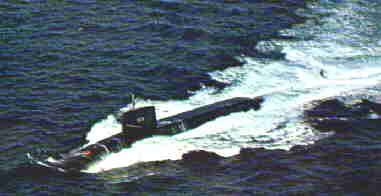 
Will Rogers (SSBN-659)-the 41st and last Polaris submarine-was laid down on 20 March 1965 at Groton, Conn., by the General Dynamics Corporation's Electric Boat Div.; launched on 21 July 1966; sponsored by

Mrs. Hubert H. Humphrey, the wife of the Vice President of the United States; and commissioned on 1 April 1967, Capt. R. Y. Kaufman and Comdr. W. J. Cowhill in command of the Blue and Gold crews, respectively.

Following shakedown, Will Rogers culminated her initial training and work-up by conducting a successful Polaris shot in the Atlantic missile range off Cape Kennedy, Fla., on 31 July 1967. In October of that year, she made her first deterrent deployment.

Will Rogers was based out of Groton, Conn., until 1974 when she shifted to a forward deployment at Rota, Spain. She conducted additional deterrent deployments from Rota over the next four years, into 1978, bringing the total number of patrols made to 35


Add Your Name to the
SSBN-659 Crew Roster