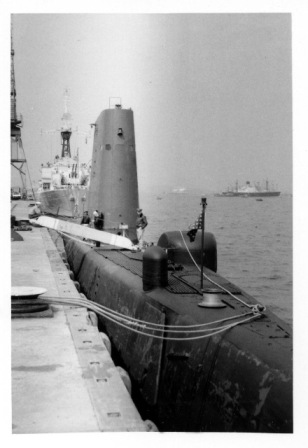 After training, the new submarine arrived Pearl Harbor 1 June 1944. She departed Pearl Harbor 23 June and proceeded via Midway to her first patrol area-East Kyushu and Bungo Suido. On 6 July she made an emergency dive when attacked by a Japanese plane. On 12 July she allowed a Japanese hospital ship to proceed in peace. After attempting an attack on a battleship, she arrived at Midway 16 August.

On 10 September she departed Midway for the Luzon Straits, South China Sea area to conduct her second patrol. She sighted two enemy battleships on the 26th, but their speed and the presence of an enemy submarine prevented an attack.

On 2 October Pomfret sank Tsuyama Maru, a 6,962-ton passenger-cargo vessel. After the usual depth charging, she departed for Saipan and moored in Tanapag Harbor 12 October.

After refit and training, Pomfret reentered the same patrol area 1 November as part of a wolf pack. Pomfret sank Atlas Maru, 7,347-tons and Hamburg Maru, 5,271-tons. On the 25th, she sank the Japanese cargo ship Shoho Mara, 1,356-tons. Pomfret departed the area and proceeded via Midway to Pearl Harbor.

The ship began her fourth patrol 25 January 1945 in another wolf pack. The mission was a picket boat sweep ahead of a carrier task force soon to strike the Tokyo-Nagoya area. After completing the sweep without encountering any picket boats, she moved south of Honshu for lifeguard work.

On 16 February she rescued a pilot from Hornet. The next day, she saved a pilot from Cabot. That day she also captured two prisoners. Unsuccessfully attacked by a Japanese destroyer on 10 March, she departed the area 23 March and arrived at Midway on the 30th.

Departing Midway 26 April for the Kurile Islands, Okhotsk Sea area, she entered the area 5 May. On the 26th she fired torpedoes at an enemy anti-submarine hunter-killer group, but scored no hits. She returned to Midway 7 June.

On 2 July she departed for her sixth war patrol. After lifeguard duty south of Honshu, she began patrol in the East China Sea. On the 19th she sank the first of 44 floating mines. On the 24th, she shelled the Kuskaki Jima lighthouse and radio installations and, on the 26th, she destroyed a threemasted junk and a small schooner. On 8 August she rescued the entire five-man crew of a B-25 bomber. Pomfret continued to shell small craft and pick up Japanese and Korean survivors until the cessation of hostilities 15 August 1945. The following day she headed for Guam. On 9 September she arrived at San Francisco.

On 2 January 1946 Pomfret departed Mare Island for Guam, arriving 22 January 1947. She proceeded to Subic Bay, Philippine Islands 9 March, and from there steamed to Tsingtao, China where for six weeks she acted as target for U.S. antisubmarine warfare vessels based at Tsingtao. On 18 May she returned to Pearl Harbor, her new homeport. During the next three years, she made two tours of duty in WestPac: the first, April to August 1947, and the second, December 1948 to April 1949.

In 1950 Pomfret arrived in San Diego. She operated along the coast until February 1951 when she participated in the Korean action until September, when she returned to San Diego to operate locally. Pomfret decommissioned in April 1952 for conversion at Mare Island Naval Shipyard to a Guppy IIA submarine. After conversion, she recommissioned 5 December and in the ensuing years alternated between coastal operations out of San Diego and WestPac deployments.

She departed for Far Eastern waters 7 July 1967 on a cruise which included anti-submarine warfare exercises in the Gulf of Tonkin off Viet Nam. She returned to San Diego 23 January 1968 and spent most of that year in exercises off of San Diego.


Add Your Name to the
SS-391 Crew Roster