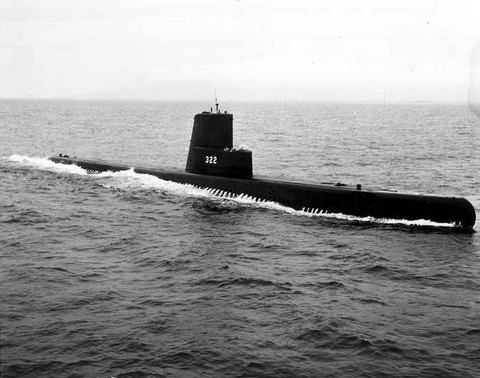 Final Disposition: Sunk as target off San Diego California 13 May 1973

The termination of hostilities occurred while Blackfin was on her fifth war patrol. After occupying a lifeguard station and destroying 61 floating mines she retired to Guam arriving in Apra Harbor 5 September 1945. After receiving voyage repairs and fuel she proceeded to San Diego where she joined Submarine Squadron 1.

Through July 1948 Blackfin continued on active duty in the Pacific. The majority of her operations were conducted near the Hawaiian and Marianas Islands. In June and July 1946 she participated in Operation Iceberg which took her across the Arctic Circle. She reported to Mare Island for inactivation in July 1948 and was placed out of commission in reserve there 19 November 1948.

In November 1950 Blackfin began conversion to a Guppy submarine and was recommissioned 15 May 1951.

Since that time she has operated with Submarine Force Pacific Fleet based at San Diego until 8 March 1954 and thereafter at Pearl Harbor. During this time she completed two tours in the Far East (December 1951-June 1952 and January-June 1955); conducted local and training operations; and has made several simulated war patrols.


Add Your Name to the
SS-322 Crew Roster