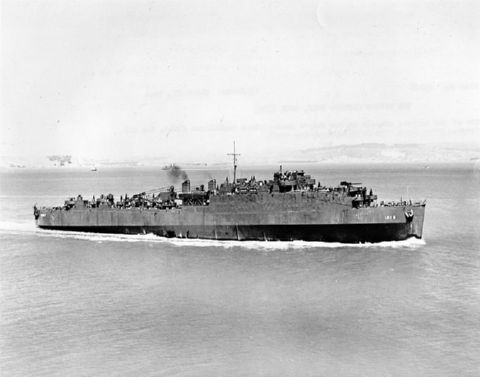 Reporting to the Pacific Fleet Belle Grove participated in the Gilbert Islands operation (20 November-2 December 1943) and the seizure of Kwajalein Marshall Islands (31 January-8 February 1944). Returning to Pearl Harbor Belle Grove operated as a cargo vessel until May visiting the Solomon New Hebrides Admiralty and Russell Islands. Between 15 June and 28 July 1944 she took part in the capture and occupation of Saipan and Tinian Marianas Islands.

After an overhaul at Pearl Harbor Belle Grove assisted in the Leyte operation making three voyages between Hollandia and Leyte loaded with troops landing craft and other equipment (20 October-21 November 1944). On 9 January 1945 she landed troops and equipment at Lingayen Gulf and returned to Leyte. She then steamed to Saipan to load supplies for the forthcoming invasion of Iwo Jima. Off Iwo Jima from 19 February to 20 March 1945 Belle Grove provided logistic support and served as a floating dry dock for landing craft.

Returning to Pearl Harbor she underwent a yard period and then transported landing craft between the Marshall Marianas and Philippine Islands. With the cessation of hostilities Belle Grove continued on transportation duty in the Southwest and Western Pacific. During November and December she transported occupation troops to China and Japan and returned to San Diego 31 December 1945. Soon afterwards she began pre-inactivation overhaul and on 30 August 1946 went out of commission in reserve.

Following the outbreak of hostilities in Korea Belle Grove was readied for active duty. She was recommissioned 27 December 1950 and reported to the Pacific Fleet. Belle Grove continued serving with the Pacific Fleet until departing San Diego 16 April 1951 for Norfolk Va. She operated with the Atlantic Fleet making one Mediterranean cruise (8 January-22 May 1952) during the next two years. Leaving Norfolk 9 April 1953 she rejoined the Pacific Fleet for operations out of Seattle Wash. and San Diego Calif. Although operating mostly in Alaskan waters Belle Grove also served in the Central Pacific and made one Far Eastern cruise.


Add Your Name to the
LSD-2 Crew Roster