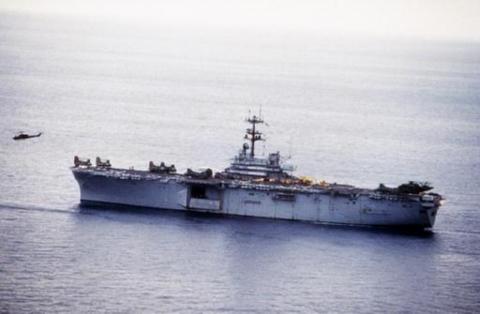 LPH-9 was the third US Navy ship to be named after the World War II Battle of Guam. The second USS Guam (CB-2) was a cruiser commisioned towards the end of the Second World War.

Gaum then remained on the East Coast with deployments to the Caribbean in 1966, 1967 and 1969. On September 18 1966 Guam recovered the Gemini 11 space capsule with Astronauts Dick Gordon and Pete Conrad onboard.

In 1971 Gaum was choosen as a test ship for the Sea Control Ship Project. The LPH was a suitable platform for VSTOL Harrier fighters and Anti-submarine helicopters. Exercises were conducted through 1974 to evaluate the concept.

USS Guam deployed regularly to the Mediterranean Sea during the rest of her service career. The deployments were varied with North Atlantic cruises for Cold Weather Amphibious Assualt Exercises. In October 1983 Gaum participated in the invasion of Grenada and then headed directly to the Mediterranean due to the Lebanese Civil War.

After overhaul in 1985 USS Gaum returned to standing watch on the East Coast of the U.S., taking her turns with deployments to the Mediterranean and Caribbean. In August 1990 Guam departed Norfolk for the Persian Gulf as part of Operation Desert Shield and Operation Desert Storm. While deployed in January 1991 Guam was sent to Somalia to evacuate diplomatic perssonel. She returned to Norfolk in March 1991.

After fitting out and builder's trials the new amphibious assault ship joined the Atlantic Fleet 21 April 1965 and sailed for Norfolk her homeport. Arriving Hampton Roads the next day for training off the Virginia Capes she departed Hampton Roads for underway training out of Guantanamo Bay Cuba.

Guam returned to Norfolk 5 July for intensive amphibious training. She sailed from Hampton Roads 29 November to participate in amphibious and ASW exercises en route to the Caribbean. On 10 December Guam joined the Amphibious Ready Squadron in the Caribbean as flagship for Amphibious Squadron 12. There she operated at peak readiness to protect the peace and security of the Caribbean and Central America constantly threatened by Communist aggression and subversion.

From 16 to 28 February 1966 Guam patrolled south of the Dominican Republic ready to land forces on the volatile island of Hispanola if necessary. She conducted amphibious exercises until entering Philadelphia Naval Shipyard 1 June for post shakedown availability.

She departed Philadelphia 2 August and prepared for service as the primary recovery ship for the Gemini 11 space flight. On 18 September nt 0959 EDT Guam recovered Astronauts Pete Conrad and Dick Gordon 710 miles east of Cape Kennedy. From 28 November to 12 December Guam participated in Exercise "Lantflex 66" and on the latter date became flagship of Amphibious Squadron 8 and Caribbean Amphibious Ready Group. She continued this duty into 1967 prepared to land troops at any point in the Caribbean where she might be needed to protect the freedom and integrity of the Americas.


Add Your Name to the
LPH-9 Crew Roster