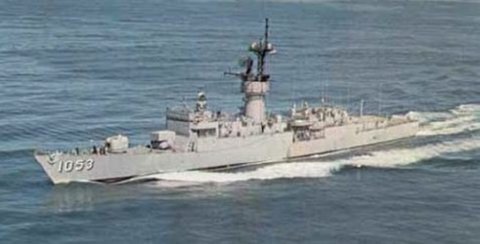 Since completing shakedown in the spring of 1970, Roark a unit of DesRon 21, conducted training operations out of her homeport of San Deigo [sic; San Diego], Calif., until the end of the year. With 1971 she began preparations for her first deployment with the 7th Fleet in the western Pacific and departed from San Diego 7 January. After stopping at Pearl Harbor and refueling at Midway Island, Roark suffered a fire in her engine room. The damage was sufficient to require her return to Pearl Harbor for repairs. Almost two months later, in March, she was underway again for WestPac. She remained in the western Pacific until July, when she started for home, arriving in San Diego 10 August. For the remainder of 1971, Roark operated out of San Diego.

The new year, 1972, brought with it another deployment to the Far East. She departed San Diego 8 February and arrived in Subic Bay, Philippine Islands, 29 February. She operated in WestPac, primarily in the Vietnam area until 15 August, when she pointed her bow homeward. Roark entered San Diego 30 August and remained in the vicinity for the duration of 1972 and the first eight months of 1973. She departed San Diego in August and arrived in Subic Bay on the 31st. After almost four months of deployment with the Seventh Fleet, Roark sailed into San Diego 21 December 1973. As of January 1974, she is still in San Diego.