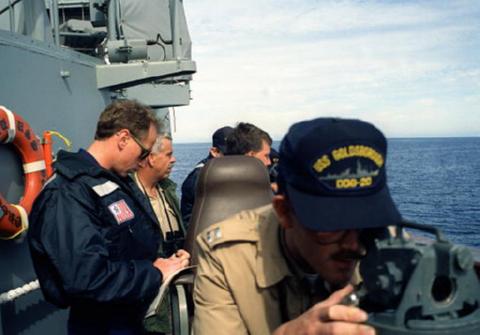 Final Disposition:Sold to Australia for parts and scrapped

Goldsborough joined the U.S. Pacific Fleet 25 December 1963 as a unit of Cruiser-Destroyer Force with homeport at Pearl Harbor.

After shakedown out of Puget Sound the new guided missile destroyer arrived Pearl Harbor 14 February 1964. Following qualification and acceptance tests she sailed 18 April for Sydney Australia for the Coral Sea celebration and returned Pearl Harbor 1 June. She operated in Hawaiian waters in the summer and early fall then got underway 23 November for Yokosuka and her first WestPac deployment. After operations strengthening the 7th Fleet during the escalating war in Vietnam Goldsborough returned to Pearl for ASW training.

The guided missile destroyer headed for the Orient once more 9 February 1966 to bolster the 7th fleet. In April she provided gunfire support for Operation "Binh Phu I" firing 594 rounds of 5" ammunition at Viet Cong troop concentration and buildings. During the last half of the month she screened attack carriers at Yankee Station. Next came SEATO exercises in May and duty as station ship at Hong Kong in June. On 26 June Goldsborough was again off Vietnam on picket station. She sailed for Hawaii 16 July and reach Pearl Harbor on the 23d.

A month later she entered the Pearl Harbor Naval Shipyard for overhaul and extensive modification to prepare for resumed action in 1967.


Add Your Name to the
DDG-20 Crew Roster