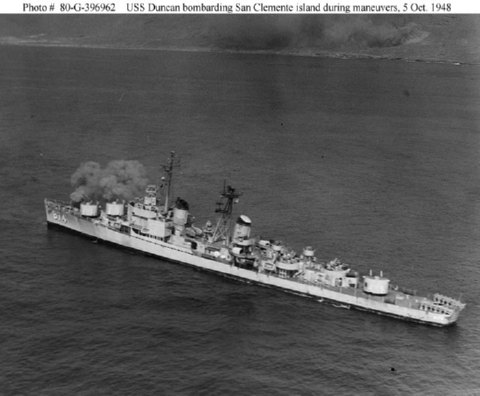 Duncan converted to a radar picket destroyer during her post shakedown overhaul sailed from Norfolk 2 June 1945 for the Pacific and after touching at San Diego and Pearl Harbor joined Cabot (CVL-28) for screening and plane guard duty during the strikes on Wake Island of 1 August. After calling at Eniwetok she continued to Okinawa to join the 7th Fleet for patrol duty off the Chinese and Korean coasts during the landing of occupation troops at Tsingtao Taku and Jinsen. Duncan served in the Far East on occupation duty until 25 March 1946 when she sailed for the west coast arriving at San Diego 28 April.

For the next year Duncan trained along the west coast keeping high her operational skills and readiness. In May 1947 she departed San Diego for a 5-month cruise to the Far East where she visited Okinawa Japan and China. On her return to the States Duncan resumed coastal operations with both aircraft and submarines. On 1 March 1948 she suffered 2 killed and 14 injured in an explosion on board. After repairs at Long Beach Calif. the destroyer rejoined the fleet for training until January 1949 when she again sailed for the western Pacific this time for 8 months.

Duncan operated between San Diego and Pearl Harbor until November 1950 when she steamed into Korean waters to join the 7th Fleet in its unremitting projection of sea power against Communist aggression. Duncan served a total of three tours off Korea during the fighting in that ravaged land. She sailed as plane guard for carriers and as antisubmarine escort for battleships; she fired shore bombardments in support of minesweepers and to interdict enemy communications; she patrolled against North Korean minesweepers and fishing craft. Through all she added her significant contribution to the vast and indispensable sea-borne support of the United Nations troops ashore.

Since the end of the Korean fighting in 1953 Duncan has remained busy in the Pacific alternating Far Eastern duty with training and maintenance on the west coast. She has visited Australia Japan the Philippines Taiwan Hong Kong and many islands of the Pacific during her far flung travels in guarding peace and order. At the end of 1960 Duncan lay in Long Beach Naval Shipyard undergoing extensive overhaul and modernization a sign of many more active years ahead.


Add Your Name to the
DD-874 Crew Roster