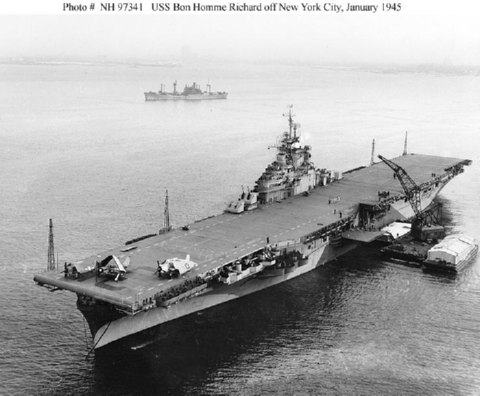 From 1944 to 1992, the USS Bon Homme Richard was a part of the Naval Fleet. She was an aircraft carrier of the Essex-class, weighing in at 27,100 tons. Bon Homme Richard was deployed in March of 1945 and joined other carriers in the final raids on Japan in the Pacific. Although the hostility ended in mid-August, the ship remained off the coast of Japan until September of that year, and then returned home.

Into 1946, she was occupied by the ‘Magic Carpet’ personnel transport services and, after that, was inactive until 1947 when she was decommissioned. In 1951, she was recommissioned and joined forces in fighting the Korean War.

Later that year, Bon Homme Richard returned home again, only to go back to combat in 1952. From May to December of that year, she was reclassified as a CVA-31 and was put into combat. In 1953, the ship was again decommissioned, but this time to undergo renovations to allow for the operation of high-performance jets.

In 1955, she was back on the water, deployed many times as a part of the 7th Fleet. There were subsequent cruises in the Western Pacific before heading into combat once again in the Vietnam War. Finally, she was decommissioned in 1971 and joined the Reserve Fleet in Bremerton, Washington for two decades before being sold in March of 1992 for scrapping.

departed Norfolk 19 March 1945 to join the Pacific Fleet and arrived at Pearl Harbor 5 April 1945. Following additional training in Hawaiian waters the carrier joined TF 38 off Okinawa 6 June 1945. During 7-10 June she joined in the attacks on Okino Daito Jima and then served with the 3rd Fleet during the air strikes against Japan (2 July-15 August). She remained off Japan until 16 September and after a short training period off Guam proceeded to San Francisco arriving 20 October.

She left San Francisco 29 October and steamed to Pearl Harbor to undergo conversion for troop transport duty. From 8 November 1945 to 16 January 1946 she made trans-Pacific voyages returning servicemen to the United States. Bon Homme Richard then reported to Puget Sound Naval Shipyard for inactivation and was placed out of commission in reserve 9 January 1947.

was recommissioned 15 January 1951 and on 10 May departed San Diego for the Far East. She joined TF 77 off Korea on 29 May and launched her first air strikes 31 May. Bon Homme Richard continued operations with TF 77 unti l 20 November 1951. The carrier reached San Diego in mid-December and on 20 May 1952 was off again to the Far East. She joined TF 77 once more on 23 June and took part in the heavy strikes against the North Korean power complex (24-25 June) and the amphib ious feint at Kojo (12-16 October). She continued operations against North Korean targets until 18 December 1952 and then steamed to San Francisco where she arrived 8 January 1953. Her classification was changed from CV-31 to CVA-31 1 October 1952.

went out of commission 15 May 1953 preparatory to modernization. When recommissioned 6 September 1955 she had an angled and strengthened flight deck enclosed bow enlarged elevators and steam catapults. She completed her con version period 31 October 1955 and commenced sea trials in the Alameda-San Diego area.

Bon Homme Richard has since continued to serve with the Pacific Fleet and has made two tours of the Far East.

received one battle star for her World War II service and five battle stars for participation in the Korean conflict.


Add Your Name to the
CV-31 Crew Roster