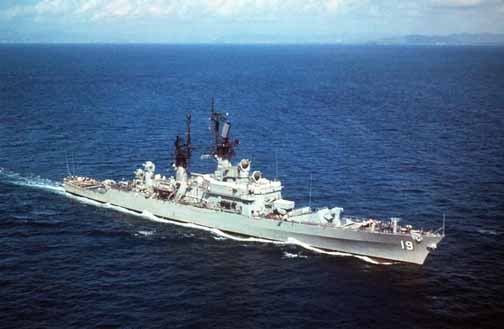 The USS DALE (CG-19), a Leahy class cruiser, was commissioned on 23 NOV 1963. USS DALE was built as DLG-19 at New York Shipbuilding Corporation, Camden, New Jersey. After commissioning DALE steamed to the West Coast and took up duty with the Pacific Fleet, deploying to the Western Pacific fives times. DALE under went a 13 month upgrade/overhaul at the Bath Iron works and resumed duty in December 1971 with the Atlantic fleet. At first homeported in Newport, Rhode Island after overhaul, later shifted to Mayport, Florida, USS DALE sailed on a series of deployments over the next twenty three years to the Mediterranean, the Caribbean and North Atlantic. DALE was re-designated CG-16 in July 1975. In 1982 DALE voyaged for the first time to Indian Ocean. USS DALE served her country for 29 years, 9 months and 4 days, until decommissioned on 27 SEP 1994. The hulk of the DALE was disposed of during a fleet exercise in April 2000.


Add Your Name to the
CG-19 Crew Roster