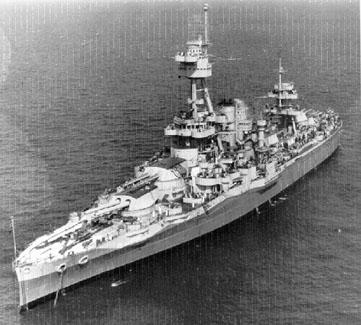 The Navy brought USS New York into service upon her commission in April of 1914. She served throughout the east coast and Caribbean before the United States joined World War I. Once the US became active, the ship served as the flagships for battleships in the Sixth Battle Squadron. She moved to the Pacific Fleet after the end of the war. That remained her home for over a decade. USS New York underwent a major modernization in the mid 1920s. After returning to the Atlantic Fleet, she represented the United States Navy with her trip to Great Britain in 1937 for the coronation of King George VI.

USS New York patrolled with the Neutrality Patrol up until the Second World War broke out. At that point, she undertook escort duties for supplies and personnel sent to Europe from the United States. She provided gun support for forces at various points in the North African invasions. As the war in Europe continued, she returned to her escort duties. In early 1945, USS New York transferred to the Pacific where she provided gun support for the invasions of Iwo Jima and Okinawa. After the war, her last commission was acting as a target during the atomic testing in the Marshall Islands. In 1948, the Navy sunk her off the coast of Hawaii.

Named for: The State of New York

Final Disposition:Employed as a target ship in the atomic bomb tests at Bikini Atoll. Later sunk as a target on 17722 by aircraft and nav


Add Your Name to the
BB-34 Crew Roster