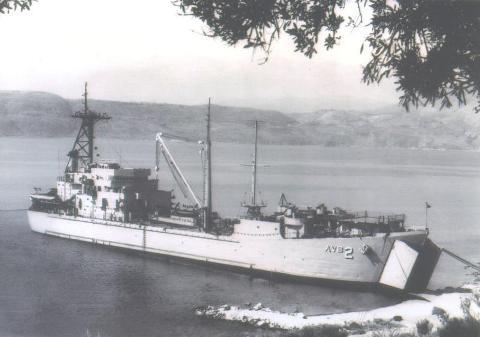 LST-1154 held her shakedown in the Caribbean and returned to Boston on 8 October. On 12 December, she was assigned duty as flagship for Tractor Flotilla Two. Operating out of Little Creek, Va., her home port, the tank landing ship ranged the eastern seaboard from Labrador to ports in the Caribbean until mid-1958. On 1 July 1955, the LST was named Tallahatchie County.

On 12 May 1958, Tallahatchie County stood out of Davisville, R. I., and proceeded to the Mediterranean. During the six-month deployment, she visited ports in Spain, Crete, Malta, Greece, Gibraltar, Italy, and Morocco before returning to the United States on 12 December to resume east coast operations. The LST deployed to the 6th Fleet again on 27 July 1959. She returned to Davisville on 11 February 1960 and operated along the east coast until entering the Charleston Naval Shipyard for conversion into an advance aviation base ship.

On 3 February 1962, Tallahatchie County was re-designated AVB-2. She now had a complement of 272 and quarters for the 180 men of an aircraft squadron.

Her mission was to be able to beach anywhere that an airfield existed, to unload her 14 mobile support vans, and to be in full operation in four hours. The vans contained spare parts and equipment for weather forecasting, aircraft repairs, electronic repairs, and communications. On 15 May, Tallahatchie County got underway for the Mediterranean and arrived at Naples, her new home port, on 8 June 1962.

During the next 17 months, she conducted advance base problems at Souda Bay, Crete, and Cagliari, Sardinia. From 1 November to 15 December 1963, she made a 4,800-mile cruise of the eastern Mediterranean in support of the Naval Oceanographic Office. During the first part of 1964, Tallahatchie County was overhauled at an Italian shipyard, Societa Escercizio Bocini Napoletani, and then returned to operations in support of the 6th Fleet. During September 1964, she participated in an advance base exercise in conjunction with NATO Operation "Fallex." In February 1965, the advance base ship was called upon to salvage a jet aircraft which had splashed in shallow waters off the coast of Libya. She then returned to Naples to prepare for her longest advance base operation to that time. Patrol Squadron 24 operated from Tallachatchie's advance base in Souda Bay from July through September while the runways at the Naval Air Facility, Sigonella, were being repaired.

Tallahatchie County operated out of Naples until 15 January 1970 when she was decommissioned and struck from the Navy list. She was sold for scrap to Contieri Navali Santa Maria, Genoa, in July 1970


Add Your Name to the
AVB-2 Crew Roster