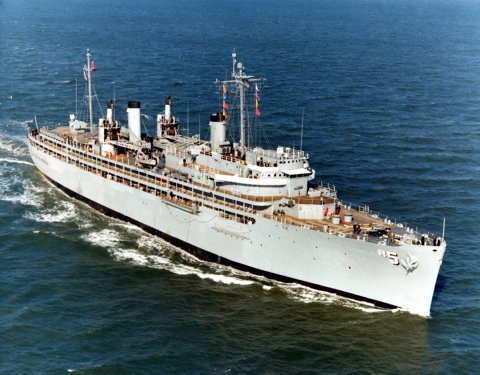 The USS Vulcan (AR-5) keel was laid 16 December 1939 at the New York Shipbuilding Corporationin in Camden, New Jersey. Sponsored by Mrs. James Forrestal, wife of the Under Secretary of the Navy, Vulvan was launched on 14 December 1940 and commissioned at the Philadelphia Navy Yard on 14 June 1941.

After a shake down cruise to San Juan, PR, and Guantanamo Bay, Cuba, USS Vulcan underwent a final fit out at the Philadelphia Navy Yard. She was assigned to Argentia, Newfoundland, the western terminus of the convoy routes to and from Europe. As the Summer of 1941 progressed and the war in Europe pulled more US ships into convoy duty, Vulcan was moved to Iceland where she supported a Task Force that included USS Wasp (CV-7), USS Mississippi (BB-41), Wichita (CA-45),and a squadron of four destroyers. Vulcan remained in Iceland through the winter of 1942.

Vulcan arrived in Boston in May 1942, where she underwent repairs. She returned to Argentia from June to November 1942, Vulcan then steamed to Iceland on 18 November, remaining there until April 1943. After repairs in Norfolk during June 1943 , Vulcan departed for the Mediterranean and Oran, then Algiers, Algeria where she spent the next year. In late summer 1944 Vulcan supported the invasion of southern France.

Vulcan returned to Norfolk and overhaul. Exiting the shipyard she steamed to the Pacific, where she operated out of Guadalcanal, Tulagi, Nouma and Ulithi. After the war ended Vulcan moved to Okinawa. Starting in September 1945 USS Vulcan supported various ships of the Occupation Force, at Kure, Kobe and Yokosuka Japan.

In March 1946 Vulcan headed for home. touching at Pearl Harbor and transiting the Panama Canal while voyaging to Brooklyn, New York.

Vulcan was homeported at Newport, Rhode Island after the war. In February 1954 she was transfered to Norfolk, Virginia. USS Vulcan spent most of the next 35 years on the Western side of the Atlantic, servicing the ships of the US Atlantic Fleet. She ranged from Newfoundland to the Caribbean. In October 1962 the Cuban Missle Crisis erupted and Vulcan supported the Naval blockade from San Juan, Puerto Rico.

In September 1964 Vuclan crossed the Atlantic for NATO exercise, returning in Decmeber 64.

Vulcan continued in Service To The Fleet through 1991.

USS Vulcan was decommissioned on 30 September 1991 and laid up at NISMF at James River, Virginia. Her hulk was sold for scrapping.

Vulcan (AR-5) was laid down on 16 December 1939 at Camden N.J. by the New York Shipbuilding Corp.; launched on 11 December 1940 sponsored by Mrs. James Forrestal wife of the Under Secretary of the Navy and commissioned at the Philadelphia Navy Yard on 14 June 1941 Comdr. Leon S. Fiske in command.

Following her shakedown cruise to San Juan Puerto Rico and Guantanamo Bay Vulcan underwent postshakedown repairs at the Philadelphia Navy Yard in mid-August. Assigned to the Atlantic Fleet Train on the 20th the repair ship departed Philadelphia the following day and proceeded via Casco Bay Maine to Argentia Newfoundland.

By this time the Atlantic Fleet was becoming more fully involved in the Battle of the Atlantic. In July 1941 at the request of the Icelandic government the United States had occupied Iceland (the strategic island which as the German geopolitician Karl Haushofer wrote lay pointed "like a pistol . . . at the United States") and had established bases at the barren ports of Reykjavik and Hvalfjordur. Marine wags soon nicknamed these places "Rinky Dink" and "Valley Forge " respectively.

Prompted by fears that the German battleship Tirpitz would break out into the Atlantic as her sister ship Bismarck had done in the spring of 1941 the Navy dispatched a task force to Iceland to deter such a move. Accordingly the unit (designated Task Force (TF) 4 and based around Wasp (CV-7)) sailed from Argentia on 23 September. Besides the valuable carrier the force included Mississippi (BB-41) Wichita (CA-45) Vulcan and a screen of four destroyers. A German U-boat prowling to the southwest of Iceland sighted the ships on the 26th but could not keep up with or identify the Americans. Having outpaced their adversary TF 4 reached "Valley Forge" on 28 September.

While Tirpitz did not sortie the U-boats continued their deadly forays against Allied shipping. By the fall of 1941 American destroyers were engaged in convoy operations half-way across the Atlantic turning their charges over to British units at the MOMP (mid-ocean meeting point). On 4 September Greer (DD-145) narrowly avoided being torpedoed after shadowing a German U-boat.

During the midwatch on 17 October 1941 U-68 torpedoed Kearny (DD-432) while the latter was screening Convoy SC-48. With 11 bluejackets dead Kearney limped into Reykjavik a gaping hole and buckled plating disfiguring her starboard side below and aft of the bridge. Vulcan provided timely and effective assistance to the stricken warship. Since permanent repair facilities (such as a drydock) were nonexistent Kearny pulled up alongside the repair vessel and her port side was flooded to raise the torpedo hole above water level. Soon Vulcan's repair force had cut away the damaged plating and had fixed a patch. By Christmas 1941 Kearny could sail for the east coast and permanent repairs at Boston.

Operations in these inhospitable climes posed natural dangers as well fog and storms frequently hampered operations and caused collisions. In November Niblack (DD-424) was rammed by a Norwegian freighter. The destroyer had been scouring Iceland's coastal waters for a straying Icelandic merchant vessel when the accident occurred costing Niblack an anchor and putting a hole in her side plating. Vulcan swiftly fixed the damage and patched the side enabling the destroyer to resume her vital escort duties.

Vulcan remained in Iceland's chill and barren area into the spring of 1942. Meanwhile on 7 December 1941 a Japanese task force had struck Pearl Harbor and severely crippled the battleships of the Pacific Fleet plunging the United States into war on both oceans. Vulcan (bound for home in company with Tarazed (AF-13) Livermore (DD-429) and the familiar Kearny) departed "Valley Forge" on 26 April 1942 and arrived at Boston on 2 May. There the repair ship underwent a drydocking before she returned northward to support the Fleet's operations in the North Atlantic. Based at Argentia from 16 June to 14 November Vulcan shifted to Hvalfjordur and relieved Melville (AD-2) there on 18 November. She remained at "Valley Forge" until she got underway on 6 April 1943 bound via Londonderry Northern Ireland for Hampton Roads.

After repairs at Norfolk from 8 to 22 June Vulcan headed for the Mediterranean and arrived at Oran Algeria on the 27th. Shifting to Algiers in late June Vulcan sent a fire and rescue party to the burning British ammunition ship Arrow. Three Vulcan sailors brought a boat alongside the flaming vessel and cut through her side plating to rescue British sailors trapped below decks. For their bravery and resourcefulness the trio from the repair ship received decorations from the British government and Navy and Marine Corps medals from their own.

Vulcan remained based on the North African coast into the summer of 1944. In August and September the repair ship supported the invasion of southern France and received her sole battle star for providing repair services to the ships and craft involved in the operation.

By late 1944 Vulcan was urgently required in the Pacific and she accordingly departed the Mediterranean on 23 November 1944 in Convoy GUS-59. After voyage repairs at Norfolk which lasted into January 1945 the repair ship sailed for the South Pacific. Arriving at Guadalcanal on 9 February 1945 Vulcan operated successively out of Tulagi Noumea and Ulithi for the remainder of the war. From Ulithl Vulcan serviced the amphibious units which participated in the assault on the key island of Okinawa.

After hostilities with Japan ceased Vulcan shifted to Okinawa and entered Buckner Bay in the wake of a destructive typhoon which had forced some ships aground and had severely damaged others. Repair work was well in hand by late September when another typhoon threatened the anchorage. Vulcan led 17 merchantmen to sea in a typhoon evasion sortie a mission successfully accomplished without loss or damage by 28 September.

Vulcan sailed for Japan immediately thereafter to support the occupation of the erstwhile enemy's home islands. Leading a group of service force ships and oilers through dangerous still-mined waters Vulcan arrived in Hiro Wan near Kure Japan on 8 October. Here the repair ship established an advance service unit to provide food oil and water to the ships of the occupation force based there. She also set up mail medical and recreational facilities ashore. In addition she performed maintenance tasks on the diesel-powered vessels of the mine forces then clearing the waters around the Japanese home islands.

Vulcan also operated out of Kobe and Yokosuka into the new year. Departing Yokosuka on 9 March 1946 the repair ship sailed for the east coast of the United States calling at Pearl Harbor and transiting the Panama Canal en route. She arrived at Brooklyn N.Y. on 15 April 1946. Vulcan operated at Newport R I until February 1954 when she shifted to Norfolk.

The ship supporting the Atlantic Fleet with repair services was homeported at Norfolk into the mid1970's. During this time she conducted repairs alterations and overhauls on a wide variety of vessels. She called at ports from the Caribbean to Canada providing repair services to the Fleet at such ports as Guantanamo Bay San Juan New York and Boston as well as Mayport Fla. and Charleston S.C.

When American intelligence pinpointed the presence of Russian missiles in Cuba in the fall of 1962 the United States and the Soviet Union stood "eyeball to eyeball" in the Caribbean. Vulcan sailed to San Juan where she provided essential repair services to the ships operating on the "quarantine" line off Cuban shores to prevent the arrival of any further Russian military equipment. The ship also assumed an additional role as electronics and ordnance repair vessel as well. After supporting the Cuban blockade from 2 to 26 November she returned to Norfolk to resume normal operations.

Only once in the 1960's and 1970's did Vulcan venture beyond her normal deployment bounds of the east coast and the Caribbean. In the fall of 1964 the repair ship sailed for Europe to participate in NATO exercises. Departing Norfolk on 8 September bound for Scotland she arrived at Greenock on 21 September.

After participating in NATO Exercise "Teamwork " Vulcan called at Antwerp Belgium Le Havre France and Rota Spain before participating in amphibious Exercise "Steel Pike I" off Huelva Spain. She returned to Norfolk soon thereafter to again take up her regular duties.

Besides type and underway training exercises at sea Vulcan made an occasional NROTC midshipman cruise and conducted individual ship exercises in between her regular long assignments as repair ship at Norfolk. Among the ships for which Vulcan provided availabilities was the intelligence ship Liberty (AGTR5). Between 24 March and 21 April Liberty lay alongside the repair ship before getting underway later that spring for the fateful overseas deployment in which she was attacked by Israeli planes and motor torpedo boats off El Arishon on the morning of 8 June 1967. In the 1970's Vulcan's itinerary included recreational and port visits to such places as Cartagena Colombia; Ft. Lauderdale Fla. Halifax Nova Scotia and the more regular ports such as Charleston and Guantanamo Bay. During the ship's major overhaul in 1976 her long-time main battery (four 5-inch guns) was removed and replaced by four 20-millimeter guns.

Vulcan as of April 1978 continued to serve at Norfolk as an Atlantic Fleet repair ship.


Add Your Name to the
AR-5 Crew Roster