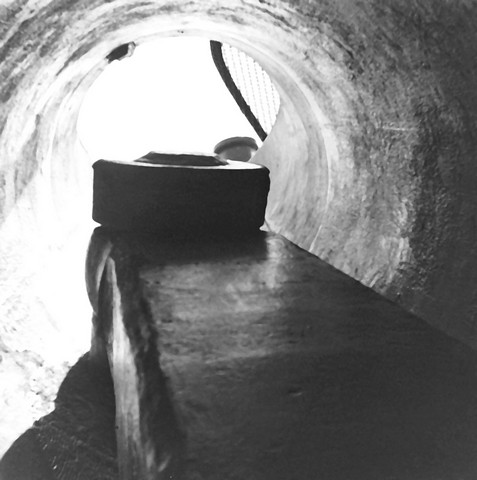 After fitting out in the Boston Naval Shipyard, Wichita on 17 June sailed for the west coast. Following stops at San Juan, Puerto Rico, and Guantanamo Bay, Cuba, and after transiting the Panama Canal, she arrived at Long Beach, Calif., her home port, on 19 July. For the next four months, she remained at Long Beach undergoing postconstruction availability. In December, she got underway to conduct standardization trials, followed by shakedown training. In February 1970, the ship began a two-month post-shakedown availability at Long Beach. In April, she began normal operations out of Long Beach, which included type training and damage control training which kept the ship busy until 22 June, when she began her first deployment to the western Pacific. She changed operational control to Commander, 7th Fleet on Independence Day and arrived in Subic Bay on 11 July. After adjusting her load at Subic, she got underway for her first line period in support of the combat ships operating off the coast of Vietnam. During her first deployment to the western Pacific, Wichita made five separate line swings to replenish the ships operating on "Yankee Station." She terminated each at Subic Bay and varied her routine with two liberty calls at Hong Kong. The ship concluded her first deployment when she arrived back in Long Beach on 2 February 1971.

Wichita spent the next six months engaged in operations out of her home port. These included refresher training, underway replenishments, and port visits to other American and Canadian ports. She also participated as a support ship in the tests conducted on the new Mark 48 torpedo. On 7 August, she departed Long Beach for her second tour of duty with the 7th Fleet. She arrived in Subic Bay on the 24th and embarked upon her first line swing on the 31st. After two periods on station off Vietnam, Wichita visited Sattahip, Thailand, late in October. Two more line periods followed in November and early December. On 10 December, however, she received orders to join a contingency force bound for the Indian Ocean in the wake of the Indo-Pakistani War. She remained in the Indian Ocean until early January 1972 at which time all ships returned to the operating area off the coast of Vietnam. Wichita, however, after a very brief tour on station off Vietnam went to Subic Bay for a much-needed upkeep. She made one more line swing to "Yankee Station" in February and then headed back to Long Beach, where she arrived on 31 March. Wichita remained in the United States only long enough to allow for the usual month of post-deployment leave and upkeep and to conduct some major repairs at Hunters Point Naval Shipyard.

On 17 July, she again pointed her bow westward and set a course for the Far East. On 4 August, the ship arrived in Subic Bay. During the next six months, Wichita made six replenishment voyages to the waters surrounding Vietnam. She also made frequent stops at Subic Bay to load supplies and conduct repairs as well as liberty calls at Hong Kong and at Sattahip in Thailand. She concluded that deployment when she arrived back in Long Beach on 16 March 1973.

The end of that deployment coincided with the end to American involvement in the Vietnamese civil war. While that stopped Wichita's support of combat operations, it did not interrupt her pattern of deployments to the western Pacific. She settled into a more normal routine alternating peacetime operations with the 7th Fleet with routine duties along the west coast of the United States. After six months on the west coast of the United States, the ship embarked upon her fourth tour of duty with the 7th Fleet, her first under peacetime conditions. She provided routine support for the ships of the 7th Fleet and for the ships assigned to a fast carrier task force operating in the Indian Ocean. She returned to Long Beach on 26 March 1974 and, following post-deployment standdown and a brief period of west coast operations, entered the Long Beach Naval Shipyard on 28 June to begin her first regular overhaul. She remained in the shipyard until the following January.

On 24 January 1975, her home port was changed from Long Beach to San Francisco. Four days later, she completed overhaul and got underway for the first time since early in the previous summer. Following trials out of Long Beach, a voyage to Acapulco, Mexico, and refresher training out of San Diego, Wichita finally arrived in her new home port on 4 April. After a month of preparations, the ship departed San Francisco on 6 May, bound for a seven-month deployment to the western Pacific. She arrived in Subic Bay on 24 May and began a tour of duty with the 7th Fleet characterized by a full schedule of underway replenishments and port visits to such places as Hong Kong, Sasebo, and Yokosuka in addition to Subic Bay. Her assignment lasted until 26 November at which time she departed Subic Bay to return home. She made a stop at Pearl Harbor early in December and reentered San Francisco on the 15th.

Wichita spent the entire year of 1976 engaged in normal operations out of San Francisco. She participated in type training and in several operational readiness exercises. By the end of the year, she was preparing for her sixth deployment to the western Pacific. That deployment began on 12 April 1977 after a period of refresher training. After a somewhat extended voyage, she arrived in Subic Bay on 4 May. During this deployment, the ship initially operated from Subic Bay; but, after 26 July, she limited heractivities to the East China Sea and the Sea of Japan, operating from the Japanese ports of Sasebo and Yokosuka. Those duties in support of the 7th Fleet continued until 6 November when she departed Yokosuka to return to the United States. She concluded the deployment at Alameda, Calif., on 21 November.

Following post-deployment standdown, Wichita resumed normal west coast operations. These included the usual type training and operational readiness exercises as well as port visits to American and Canadian ports. She also helped to train naval reservists. While participating in the initial phases of RIMPAC 78, the ship visited Pearl Harbor on 5 and 6 April 1978 to take on stores and to give her crew a brief liberty. She returned to Pearl Harbor later in the month at the conclusion of her RIMPAC duties. Such activities as these occupied her time until 2 November when she entered the Triple A Shipyard at Hunters Point, Calif., to begin a nine-month overhaul. As of the summer of 1979, she was completing that overhaul.


Add Your Name to the
AOR-1 Crew Roster