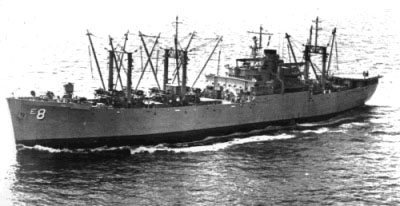 After shakedown in the Chesapeake Bay, Mauna Loa loaded on 5,600 tons of ammunition at Norfolk and departed Hampton Roads, Va., 19 December with a stopover at San Francisco for 2 days, arriving Pearl Harbor 17 January 1944. Assigned to the service force, on 1 February she continued on to the Marshalls escorted by Manlove (DE‑36), reaching Majuro 7 days later to begin rearming the fleet.

On 9 February a near disaster occurred while Mauna Loa was supplying Pennsylvania (BB‑38) with gunpowder. With the men on Mauna Loa moving the powder containers over faster than they could be removed to the magazines of the battleship, the cans gradually piled up to more than a hundred on Pennsylvania's forward deck. At 1635 a flash of flame leaped out across her deck, accompanied. by a dull boom-one of the cans had exploded,

Grains of burning powder were hurled about, many of them steaking down Mauna Loa's open hold. Without a moment's hesitation, Boatswain F. B. Wilson seized a hose and turned it on the burning can. This stream of water checked the fire until Pennsylvania's men could get the can over the side before it ignited the others. Two of Pennsylvania's men suffered broken legs and the man handling the powder can was blinded. Courageous performance of their duties under such hazardous conditions had become mere routine to the officers and men of the ammunition ship.

On 2 March Mauna Loa sailed for the west coast, via Pearl Harbor, arriving San Francisco the 21st to replenish her cargo of ammunition. She got underway 10 April again for the South Pacific, her destination being the New Hebrides. She reached Espiritu Santo 28 April for a month of operations, then proceeded to Eniwetok, Marshalls, where from 13 June to 23 July she supported the Marianas operation.

After a return trip to San Francisco, on 8 September Mauna Loa entered the Kossol Passage, Palaus, in company with Shasta (AE‑6) and McCoy Reynolds (DE-440). She then began a 24‑hour‑a‑day rearming of the 3d Fleet, while swept mines exploded all around the anchorage. After an unidentified plane strafed her during the night of 19 September while Portland (CA‑33) was alongside, night operations were halted.

By November she was en route to the Carolines, arriving Ulithi the 30th. Mauna Loa remained there until the beginning of the Okinawa campaign. On 13 March 1945 she departed Ulithi with TG 50.8 for 5 successful months on the line, as it came to be termed, replenishing some 99 ships underway. The Japanese capitulation 14 August found her at San Pedro, Philippines.

Mauna Loa departed San Pedro for the west coast 4 October, arriving Tiburon, Calif., the 21st. She moved up to Bremerton, Wash., 12 November. She then entered the Pacific Reserve Fleet at San Diego 15 May 1946 and decommissioned 2 June 1947.

Mauna Loa recommissioned 31 January 1955, Capt. Elgin B. Hurlbert in command, and departed San Diego 16 March for the east coast. After docking at Norfolk Naval Shipyard for alterations, she began refresher training out of Newport, R.I., 8 September; then served out of Earle, N.J., through the end of the year.

On 5 January 1956 Mauna Loa departed Earle with Mine Division 81 for Europe, arriving Naples, Italy, the 24th. The ammunition ship operated with the 6th Fleet in the Mediterranean until 28 May when she steamed from Tangiers for home. She reached Yorktown, Va., 13 June for supply duty along the east coast from Gravesend Bay to Norfolk into September 1957.

On 27 September she again got underway from Earle for another tour in the Mediterranean until her return to Norfolk 17 November for 2d Fleet operations. From 1 February to 27 June 1958 Mauna Loa made a third visit to the Mediterranean, returning to New York 7 July. She shifted to Beaumont, Tex., 15 September for inactivation and 16 December again decommissioned this time entering the Atlantic Reserve Fleet at Orange, Tex.

On 15 January 1962 the ammunition ship got underway from Norfolk for shakedown off Guantanamo Bay, Cuba, into late February. For the next 7 years Mauna Loa continued a pattern of upkeep and supply service along the east coast out of Norfolk and Earle, interspersed with training cruises and exercises in the Caribbean.

She departed Bayonne 9 October 1967 for a new and vital mission, supply operations off South Vietnam. She transited the Panama Canal the 16th on her way to the Pacific, and soon thereafter arrived off the troubled Southeast Asian area to begin service to the fleet fighting to repel Communist aggression. She continues this important duty into 1969.


Add Your Name to the
AE-8 Crew Roster