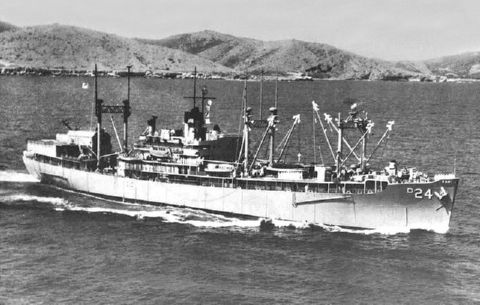 
Everglades was launched on 28 January 1945 by the Todd Shipyard Corp., San Pedro, Calif.; sponsored by Mrs. Anne E. Richardson, and completed on 23 May 1946. Never commissioned she was turned over to the San Diego Group, Pacific Reserve Fleet for inactivation on 15 May 1947.

United States embroilment in the Korean hostilities occasioned activation of Everglades who commissioned for the first time on 25 May 1951, Captain Thomas M. Brown, commanding.

Following shakedown and training exercises, Everglades transited the Panama Canal and arrived at Norfolk, Va., for duty with Destroyer Force Atlantic. Since then she has played a vital part in keeping the Navy ready, repairing Norfolk-based destroyers and servicing ships in the Caribbean or the Mediterranean where she has made four extensive cruises through the end of 1960.


Add Your Name to the
AD-24 Crew Roster