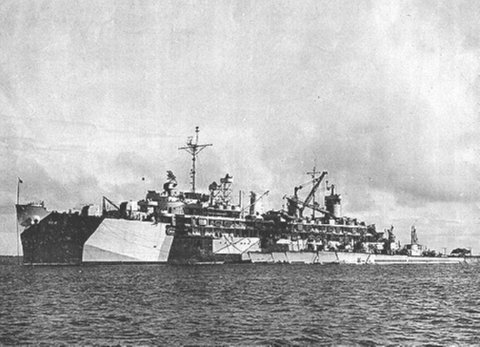 The USS SPERRY (AS-12), a Fulton-class submarine tender, was commissioned on 1 MAY 1942. USS SPERRY was built at the Mare Island Navy Yard out side of San Fransisco, California and after commissioning, six month after the start of the U.S. entry in to World War II, joined the Pacific Fleet at Pearl Harbor. As the war progressed, SPERRY sailed where needed; Australia, Midway Island, Majuro Atoll and Guam, her location at the end of the war. Remain in commission after WWII, SPERRY tended subs on the West Coast of the US, at Pearl Harbor, and in 1952 steamed to the Western Pacific to service deployed subs during the Korean War. SPERRY's forty year career was spent serving the Pacific Submarine Fleet, always true to her motto, "De Profundis Tridens" (Sea Power from the Depths). USS SPERRY served her country for 40 years, 4 months and 29 days, until decommissioned on 30 SEP 1982. SPERRY is laid up at the Suisan Bay Reserve Fleet in Benica, CA.

The USS SPERRY (AS-12) deployment history and significant events of her service career follow:

Sperry completed trials and shakedown training; and on 2 August 1942 she reported for duty to the Commander Submarines Pacific at Pearl Harbor. She remained at Oahu for almost three months refitting seven submarines and making voyage repairs to four others. On 26 October she weighed anchor and headed for Australia. After cautiously skirting the Solomon Islands and making a three-day stopover at Noumea New Caledonia the submarine tender reached Brisbane on 13 November. During her two-month stay "down under " Sperry refitted seven submarines and made a voyage repair on one On 17 January 1943 she sailed for Pearl Harbor where she arrived on the 31st. After 10 refits 10 voyage repairs and over four months at Pearl Harbor Sperry got underway on 8 June. Steaming in company with Kern (AOG-2) and Coast Guard cutter Taney she reached Midway Island on 12 June. Her stay there was probably the busiest period in her career. During five months she serviced 70 submarin es refitting 17 and making voyage repairs to 53. In mid-November she joined Florikan (ASR-9) in a voyage back to Pearl Harbor from the 12th to the 16th. She refitted eight submarines and accomplished voyage repairs on seven others between 15 Nov ember 1943 and 9 March 1944; then headed west once again.

Sperry's tour of duty at Majuro Atoll lasted from 15 March until 19 September. During her stay the submarine tender accomplished 19 refits and two voyage repairs. In addition her crew erected Camp Myrna the first recuperation camp for submarine crews in the central Pacific area on Myrna Island.

On 19 September she exited the lagoon with Litchfield (DD-336) and headed for Pearl Harbor again. They reached Oahu on the 24th but Sperry was underway again by 8 October as part of an 11-ship convoy. At Eniwetok she parted company with th e convoy; and with Corbesier (DE-438) she continued on to the Marianas. The two ships arrived at Guam on 20 October to begin a four-month tour of duty during which she serviced 20 boats 14 for refit and six for voyage repairs. Again her crew co nstructed a submarine recuperation facility Camp Dealey.

On 13 February 1945 Sperry and Southard (DMS-10) departed Guam to return to the United States. The two ships reached Pearl Harbor on 22 February. Southard remained at Pearl Harbor but Sperry continued eastward on 1 March. The submarine tender entered Mare Island Naval Shipyard on 7 Mar h and commenced an overhaul which lasted until 30 April. By 10 May Sperry was back at Pearl Harbor where she completed one refit and three voyage repairs before sailing on 30 June for th e Marianas. She was stationed at Guam from 11 July 1945 to 11 January 1946. During those six months her stay in the Marianas was interrupted only once in late November and early December when she joined Blenny (SS-324) Blower (SS-325) Blueback (SS-326) Charr (SS-328) Redfish (SS-395) Sea Cat (SS-399) and Segundo (SS-398) in a training cruise. They visited Ulithi Atoll in the Carolines and Manus Island in the Admiralties before returning to A pra Harbor 10 days before Christmas.

Eleven days into the new year Sperry weighed anchor at Apra and headed for Long Beach. She arrived at Terminal Island on 20 February and began an extensive overhaul which was completed in July of 1947. Unlike many of her sister ships Sperry remained an active unit of the fleet operating out of San Diego. She earned the coveted battle efficiency "E" three years in a row in 1948 1949 and 1950. In 1949 she participated in Operation "Miki " a war game which simulated the recapture of an en emy-occupied Oahu and while returning to San Diego she operated in support of the first publicized firings of missiles from submarines. Between 1950 and 1953 her pace was quickened by the hostilities in Korea as she serviced and supplied many of the s ubmarines recommissioned for that conflict. In 1952 she made her only voyage to the western Pacific. She sailed via Pearl Harbor where she stayed from 6 August until 21 September and served at Chi Chi Jima in the Bonin Islands from 2 to 9 October. She returned to the west coast of the United States on 25 October.

In December of 1951 the battle lines in Korea were more or less stabilized along the 38th parallel and hostilities were slowly lessened over the next two years. This resulted in a gradual return to peacetime routine for Sperry. Over the ensuing 10 years the submarine tender continued to operate out of San Diego spending most of her time in port servicing the submarines of the fleet but occasionally getting underway for training cruises along the west coast. Her area of operation extended from M exico north to Canada. From April to September 1961 Sperry was at Long Beach Naval Shipyard being brought up to date by a Fleet Rehabilitation and Modernization overhaul. In mid-September she returned to her duties as submarine tender at San Dieg o. Since then she has continued to support submarines of the Pacific Fleet again spending most of her time in port and departing occasionally for cruises along the west coast of North America and to Hawaii. As of November 1974 Sperry was still active.


Add Your Name to the
AS-12 Crew Roster