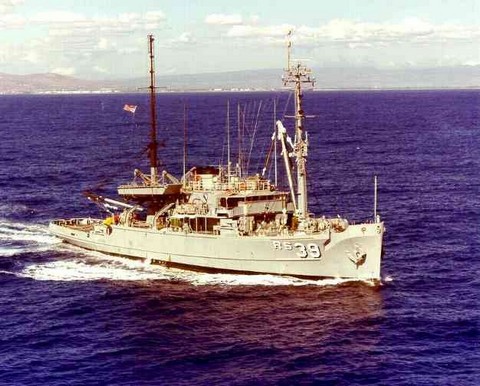 Conserver arrived at Sasebo Japan 21 September 1945 and until 3 March 1946 she carried out salvage operations at Sasebo Okinawa Yokosuka Aomori and Hakodate in support of the occupation and after preparations at Pearl Harbor arrived at Bikini 29 March. She served in the Marshall Islands aiding in Operation "Crossroads " the atomic weapons tests of 1946 until 2 September 1947 when she arrived at Manila for duty in the Philippines. From 9 April 1948 to 26 September she served in Hawaiian waters and then in Alaskan waters returning to Pearl Harbor 13 January 1949.

From Pearl Harbor Conserver returned to operate off Alaska between 14 April 1949 and 7 June and from 10 December to 25 March 1950. With the outbreak of the Korean war she arrived at Yokosuka 15 July and between 15 July and 1 August carried out salvage and diving assignments in Korean waters. After a brief overhaul at Yokosuka she salvaged a fuel pipeline at Iwo Jima and from 10 September until 24 December returned to Korean waters. After a final towing voyage from Japan to Korea in January 1951 Conserver returned to local operations at Pearl Harbor from 16 February to 28 May. After salvage duty at Kwajalein and Majuro she returned to Pearl Harbor to prepare for her second tour of duty in the Korean War. She arrived at Sasebo 27 September and operated primarily in Korean waters until 7 May 1952 when she cleared for San Diego.

After operating on the west coast until 4 August 1952 Conserver sailed for brief duty at Pearl Harbor Kwajalein Guam Subic Bay Bangkok Singapore and Sangley Point returning to Pearl Harbor 22 October. On 6 April 1953 she returned to Sasebo for duty in Korean waters until 9 November when she cleared for Pearl Harbor.

From the close of the Korean war through 1960 Conserver alternated operations in the Hawaiian Islands with occasional towing and salvage duty in Pacific islands and tours of duty in the Far East in 1954 1955 1955-56 1957 1958-59 1959 and 1960. Between 20 September 1958 and 20 October she gave salvage and towing service off Taiwan as American ships stood by during the Quemoy Crisis.


Add Your Name to the
ARS-39 Crew Roster