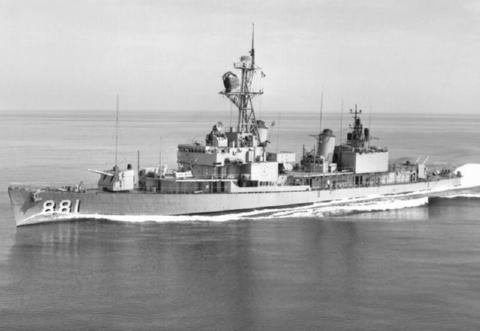 Until November 1945 Bordelon underwent shakedown and training along the east coast and in the Caribbean. She departed Norfolk 7 November and reported to Commander Destroyers Pacific Fleet at Pearl Harbor 28 November. She immediately proceeded to Kure Japan arriving in December. She operated in the area as a part of the occupation force until March 1946. She was then assigned to TF 77 based in the Marianas. During this tour she made several extended cruises to Hong Kong; Manila Philippine Islands; Shanghai and Tsingtao China Sasebo Japan; and Okinawa. She returned to the United States in December 1946.

Bordelon returned to the east coast ln January 1947 and was assigned to Destroyer Squadron 14. She was ordered to Plymouth England in September 1947 and became a unit of the Northern European Task Force. She returned to the United States in February 1948.

Since then Bordelon has carried out the normal operating schedule of Atlantic Fleet ships. She has served tour tours of duty with the 6th Fleet in the Mediterranean; conducted five midshipmen training cruises in European waters and made several voyages to the Caribbean. In addition she has participated in local operations and type training along the eastern seaboard.


Add Your Name to the
DD-881 Crew Roster