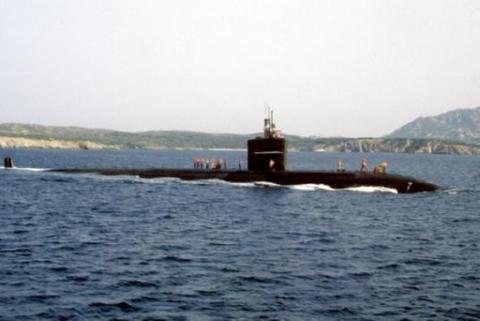 Though assigned to Submarine Squadron (SubRon) 1 and based at Norfolk, Baton Rouge carried out her shakedown training out of New London, Conn. She left Hampton Roads on 5 July and spent most of the month engaged in drills in waters off the New England coast. The attack submarine returned to Norfolk on 29 July and devoted the next four weeks to post-shakedown upkeep.

During late August and the first week in September, she participated in SUBASWEX-77 and then returned to Norfolk on 9 September. On the 12th, she headed south to carry out acoustic trials at Exuma Sound and weapons' tests out of Port Everglades, Fla. Baton Rouge arrived back at Norfolk on 7 October and remained there until early November at which time she put to sea for another round of tests carried out from Port Everglades. The warship returned to Norfolk on 23 November but embarked on an extended period at sea on the 29th.

Baton Rouge concluded that assignment at Norfolk on 5 January 1978. She moored alongside L. Y. Spear (AS-36) and conducted upkeep until 24 January when she headed back to Port Everglades. There, submarine participated in additional tests before returning to Norfolk early in February. On 20 February, Baton Rouge began her post-shakedown overhaul at the Newport News Shipbuilding and Dry Dock Co. That repair period lasted more than six months with the submarine returning to sea for trials on 28 August. In September, she prepared for overseas deployment with training out of New London, Conn. and then returned to Norfolk where she spent the first part of October completing a host of last-minute chores before embarking on her first tour of duty with the 6th Fleet. Baton Rouge set out on that assignment on 19 October and raised her first port of call in the Mediterranean Sea--La Maddalena, Sardinia--on 1 November. In addition to visits to La Maddalena, the warship also called at La Spezia, Italy, and took part in a variety of antisubmarine warfare (ASW) exercises through the winter of 1978 and 1979. The attack submarine returned to Norfolk from her first overseas assignment in March of 1979.

After post-deployment standdown, Baton Rouge resumed normal operations out of her home port in the spring. These included participation in two major ASW exercises and visits to such widely separated places as Fort Lauderdale, Fla., and Halifax, Nova Scotia. In July, she was reassigned to SubRon 8 but continued to use Norfolk as her base of operations. In September and October, Baton Rouge put to sea for a major NATO exercise--Operation "Ocean Safari"-- which took her across the Atlantic once more and included a call at Rotterdam in the Netherlands. She returned to Norfolk from that mission during the latter part of October and spent the remainder of 1979 in a restricted availability.

Baton Rouge was decomissioned on 13 January 1995 and struck from the Navy list on the same day. She was disposed of by submarine recycling on 30 September 1997.


Add Your Name to the
SSN-689 Crew Roster