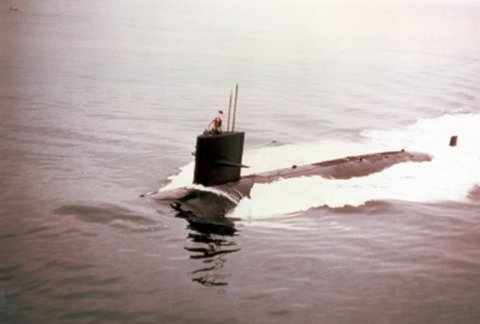 Named for: The tunny

Tunny remained at Charleston, her home port, until March when she moved to Groton, Conn., for two weeks of in-port training at the submarine base. Between March and June, she conducted shakedown training in the West Indies and along the east coast. From June to August, the nuclear-powered submarine conducted normal operations out of Charleston before heading north to the Portsmouth (N.H.) Naval Shipyard where she began post-shakedown overhaul on 12 August. The warship completed repairs on 5 October and headed back to Charleston where she resumed normal training operations.

In February 1975, Tunny began preparations for her first deployment to the Mediterranean. She stood out of Charleston and headed across the Atlantic on 6 March and changed operational control to the 6th Fleet 10 days later. During the first part of her tour in the Mediterranean, the submarine operated with Task Force (TF) 60 conducting antisubmarine (ASW) exercises with the other ships of the unit. Following refit and tender upkeep in June and early July at Santo Stefano, Sardinia, Tunny rejoined the 6th Fleet as a unit of TF 69 and resumed ASW training. After participating in a major 6th Fleet exercise late in July and early in August, the warship departed the Mediterranean for home. She changed operational control from 6th Fleet to the Atlantic Fleet Submarine Force on 17 August and arrived in Charleston 12 days later. After post-deployment stand down in September and a shipyard availability at Charleston in October and November, she resumed operations-mostly type training-out of Charleston on 20 November.

Type training along the South Carolina and Florida coasts occupied her time during the first month of 1976. February brought inspections and examinations; and, in March, she participated in two special operations designed to help develop and evaluate submarine tactics. In May, Tunny began preparations for her second tour of duty with the 6th Fleet but did not embark upon that assignment for over two months. In the meantime, she conducted one exercise-in mine warfare-in June. Finally, on 26 July, she sailed out of Charleston on her way to the Mediterranean. Following a visit to Lisbon, Portugal, the attack submarine joined the 6th Fleet on 11 August. After a month of ASW training, highlighted by  Exercise  "National  Week  XXI,"  the  warship put into  Santo  Stefano for  a month of upkeep alongside Howard W. Gilmore (AS-16). In October, she returned to sea for ASW training operations punctuated periodically with a visit to Naples or upkeep at Santo Stefano. That routine continued until 11 December, when she departed Santo Stefano to return to the United States. Arriving in Charleston on 22 December, she commenced a combination of holiday leave and up keep and post-deployment stand down.

January 1977 found Tunny undergoing an extensive upkeep following her Mediterranean deployment. She then resumed operations off the east coast which extended through the spring and summer months. In mid-September, the attack submarine commenced a two-month Selected Restricted Availability (SRA) at the Norfolk Naval Shipyard which was concluded in late November, followed by a short sea trial period. Following refresher training at the Naval Submarine School, New London, Tunny returned to Charleston for the Christmas holidays.

Tunny spent January and part of February 1978 preparing for a North Atlantic deployment which commenced in late February and concluded in late April. In July, Tunny's home port was changed to Pearl Harbor, Hawaii, and the ship transited to that port on 19 August. The remainder of the year was devoted to local operations in preparation for a forthcoming deployment to the western Pacific in 1979.


Add Your Name to the
SSN-682 Crew Roster