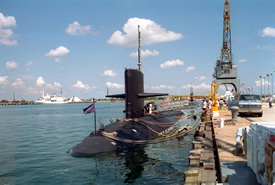 Named for: The grayling

The fifth Grayling was laid down at the Portsmouth Naval Shipyard Portsmouth N.H. 12 May 1964; launched 22 June 1967; sponsored by Miss Lori Brinker daughter of Lt. Comdr. Robert Brinker who commanded Grayling (SS-209) when she was lost in action; Graylingwas commissioned on 11 October 1969 with Charles R. Baron in command.


Add Your Name to the
SSN-646 Crew Roster