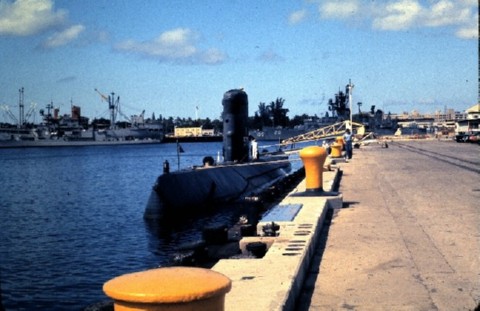 The second Swordfish (SSN-579) was laid down on 25 January 1956 by the Portsmouth Naval Shipyard Portsmouth N.H.; launched on 27 August 1957; sponsored by Mrs. Eugene C. Riders; and commissioned on 15 September 1958 Comdr. Shannon D. Cramer Jr. in command.

Swordfish completed fitting out and held her shakedown in the Atlantic. After post-shakedown availability and subsequent sea trials along the east coast she was assigned a home port in Pearl Harbor T.H. effective 16 March 1959. She steamed to Hawaii in July and was the second nuclear powered submarine to join the Pacific Fleet joining Sargo (SSN-583). Assigned to Submarine Squadron 1 Swordfish steamed over 35 000 miles during her first year in commission with over 80% of them submerged.

In January 1960 Swordfish deployed to the western Pacific for four months and became the first nuclear submarine in that area. During this time President Chiang Kai-Shek of the Republic of China was embarked for a one-day indoctrination cruise. She deployed to WestPac again on 20 June and on this occasion took President Carlos P. Garcia of the Philippines to sea for a one-day demonstration. The submarine conducted local operations in the Hawaiian area from January to May 1961. In late May the submarine got underway for the west coast of the United States where she operated between San Diego and San Francisco with various Pacific Fleet units. Swordfish returned to Pearl Harbor on 14 July and operated locally until September when she deployed to the western Pacific for two months.

Swordfish sailed to Mare Island in January 1962 and became the first nuclear submarine to be overhauled on the Pacific coast. She returned to Hawaii on 29 September for refresher training and local operations. On 26 October the submarine was again deployed to WestPac. She continued operating from Pearl Harbor on local operations and on deployments to the western Pacific as a member of Submarine Division 71 until 30 June 1965 when she was assigned to SubDiv 11 which was also based there. In late 1965 Swordfish was awarded a Navy Unit Commendation for special operations from 8 October to 3 December 1963 from 22 September to 25 November 1964 and from 20 May to 23 July 1965.

Swordfish arrived at the San Francisco Naval Shipyard on 1 November 1965 to undergo a refueling and Sub Safe overhaul which lasted until 31 August 1967. Sea trials were held in September and weapons trials in early October. She returned to Pearl Harbor on 13 October and conducted refresher training until 31 December 1967. The period 1 January to 2 February 1968 was spent in preparation for overseas movement. Swordfish deployed to the western Pacific from 3 February to 5 September and upon her return to Pearl Harbor remained in port the remainder of the year.

Swordfish conducted local operations in the Hawaiian area from 1 January to 11 May 1969 at which time she again deployed until 4 November. The remainder of the year was spent in a leave and upkeep period. She was deployed on special operations from 24 February to 9 April 1970 and then entered drydock at Pearl Harbor for an availability period which lasted until 30 September. The remainder of calendar year 1970 was spent conducting a period of crew training necessitated by the yard period.

Local operations during 1971 were broken by a tour in WestPac from 24 March to 22 September. During this deployment the submarine visited Yokosuka Buckner Bay Pusan and Hong Kong. Swordfish continued local operations until 26 June 1972 when she entered the Pearl Harbor Naval Shipyard for her annual overhaul which lasted through 31 December 1973. Upon completion of the yard period Swordfish resumed operations with her Pearl Harbor-based squadron and was still operating from there in March 1975.


Add Your Name to the
SSN-579 Crew Roster