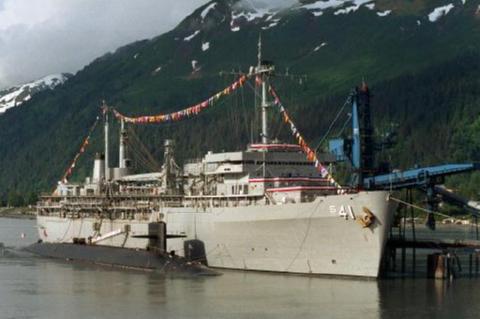 The USS ALASKA (SSBN-732), an Ohio-class ballistic missile submarine, was commissioned on 25 JAN 1986. USS ALASKA serves her country from her homeport of

Named for: The U.S. state of Alaska


The fourth Alaska (SSBN-732) was laid down on 9 March 1983 at Groton, Conn., by the Electric Boat Division of the General Dynamics Corp.; launched on 12 January 1985; sponsored by Mrs. Catherine Ann Stevens; and commissioned at the Submarine Base, New London, on 25 January 1986, Capt. Paul L. Callahan (Blue Crew) and Capt. Charles J. Chotvacs (Gold Crew) in command.

Alaska spent much of 1986 engaged in shakedown training for her two crews and in clearing up the many details that attend a new ship's addition to the Fleet.


Add Your Name to the
SSBN-732 Crew Roster