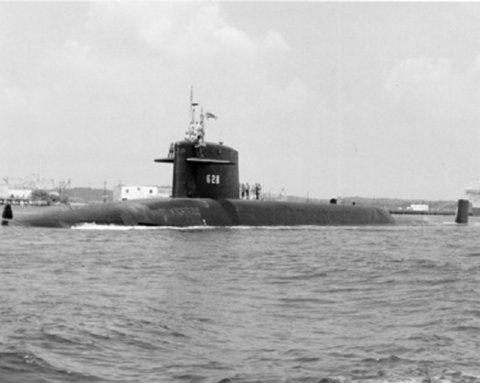 Tecumseh soon departed the east coast, bound for Hawaii. Based at Pearl Harbor, the nuclear-powered submarine deployed to the Marianas on 17 December 1964, arriving at Guam 12 days later to commence deterrent patrols. Alternately manned by "blue" and "gold" crews, she conducted 21 of these missions into 1969.

The submarine was then transferred to the Atlantic Fleet where she proceeded via Pearl Harbor and the Panama Canal to the east coast and arrived at Newport News, Va., on 8 November 1969. Soon thereafter, she entered the Newport News Shipbuilding and Drydock Company yards for a conversion which replaced her Polaris missiles system with its Poseidon counterpart. Emerging from drydock on 9 May 1970, Tecumseh underwent a thorough overhaul through that fall and winter before being assigned a new home port of Charleston, S.C., on 18 February 1971.

She conducted sea trials and shakedown out of Charleston before conducting two deterrent patrols in late 1971. Subsequently deployed to Holy Loch, Scotland, Tecumseh arrived in Scottish waters on 9 February 1972. She conducted 18 more deterrent patrols out of Holy Loch through 1976 and operates with the Atlantic Fleet into 1980.


Add Your Name to the
SSBN-628 Crew Roster