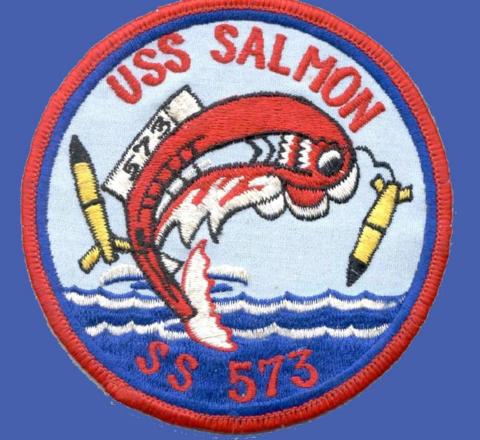 Salmon, the second of a class of two radar-picket submarines and the largest and most powerful conventional-powered submarines in the United States Navy, conducted her shakedown cruise between 19 February and 10 May 1957, ranging from Newport, R.I., to Guantanamo Bay, Cuba. She departed Portsmouth for the west coast in late May, transited the Panama Canal on 3 July; visited Callao, Peru; and proceeded to San Diego, Calif., arriving on the 25th.

Salmon conducted local operations in southern California waters, as a unit of Submarine Division (SubDiv) 33, until she began her first western Pacific deployment on 23 September. She sailed via Pearl Harbor and Midway to join the 7th Fleet off southern Japan on 19 October. For the remainder of the year, she participated in fleet training exercises and special operations, with port calls at Yokosuka, Japan; Hong Kong, B.C.C.; Manila and Subic Bay, Philippines; and Kaohsiung, Taiwan. Salmon departed Yokosuka on 31 March 1958 and returned to San Diego on 19 April.

Resuming local operations, Salmon remained in the San Diego area for the rest of the year. From 6 January 1959 until 30 May, she underwent overhaul and limited conversion at Mare Island. Giving up a large radome from her superstructure, she gained instrumented missile guidance capability and improved, longer range sonar. Salmon then prepared for her second WestPac deployment.

Salmon departed San Diego on 17 July and sailed to Pearl Harbor where her crew received missile guidance training, then proceeded to Japan and joined the 7th Fleet on 21 August. She operated with the fleet in Allied training exercises, provided services for other 7th Fleet surface and subsurface units for training purposes, and made visits to various ports, before returning to San Diego on 14 February 1960.

Through 1960 and 1961, Salmon operated from San Diego with occasional visits to San Francisco; Astoria, Oreg.; Tacoma and Port Angeles, Wash.; and Esquimault, British Columbia. On 1 March 1961, she was reclassified SS-573; and, on 1 November, she was reassigned to SubDiv 52.

On 1 June 1962, Salmon departed San Diego for her third WestPac deployment. She visited Papeete, Tahiti, from 13 to 16 June, then proceeded to Yokosuka for duty with the 7th Fleet. She subsequently operated with ASW hunter-killer groups in fleet exercises and often engaged in free-play battle problems with individual surface units. During this deployment, she visited Hakodate and Sasebo, Japan; Naha, Okinawa; and Hong Kong, B.C.C. Salmon returned to San Diego on 20 December and became flagship of Submarine Flotilla 1; and, in addition to that distinction, was awarded the Golden E for excellence in battle efficiency for the past five consecutive years, which rated her as the leading submarine of her division. Salmon was the first submarine to earn a Golden "E" and was to better that record by winning hashmarks signifying retention of that status during 1963 and 1964. On 3 June of the latter year, she put into the San Francisco Naval Shipyard to undergo FRAM II conversion. Departing the yard on 19 April 1965, as a modernized GUPPY III, she moved to the Puget Sound, Wash., area for evaluation and sound tests. She then returned to San Diego, to resume local operations, on 4 May.

Salmon commenced her fourth WestPac deployment on 23 August. She joined Submarine Flotilla (SubF-lot) 7 of the 7th Fleet on 14 September and conducted operations in Japanese and southwest Pacific waters until returning to San Diego on 20 April 1966. Salmon's fifth deployment to the western Pacific was from 20 March to 4 October 1967. During this tour, she provided services to 7th Fleet units operating off Vietnam in support of operations to counter communist aggression in southeast Asia. In September, she rendezvoused with Ulysses S. Grant (SSBN-631) and Kamehameha (SSBN-640) somewhere in the Pacific to act as a simulated target sub for training in antisubmarine tactics.

Through the spring of 1968, Salmon underwent overhaul at San Francisco in preparation for support of the DSRV (Deep Submergence Recovery Vehicle) program, to evaluate submarine rescue and salvage equipment at extreme depths. On 1 June, she was redesignated AGSS-573 for her role as mother sub and underway submerged launching and recovery platform for the experimental mini-subs. However, delays in the program resulted in her return to San Diego for local operations, following preliminary trials at Puget Sound. She subsequently sailed on 25 October for her sixth WestPac deployment.

In November, Salmon visited Yokosuka and Hong Kong. From 4 to 19 December, she conducted special operations off the coast of Vietnam; and, from 26 December 1968 to 10 January 1969, she participated in SEATO exercises out of Sangley Point in the Philippines. She then returned to Yokosuka and then proceeded to Sasebo for special operations before returning to the United States on 5 April.

Salmon arrived at San Diego on 25 April and conducted local operations for the remainder of the year. She resumed her former designation as SS-573 on 30 June. On 3 January 1970, she departed San Diego for her seventh WestPac tour. In February, she conducted type training in the Philippines with Harder (SS-568) and her sister sub, Sailfish (SS-572). From there, she visited Buckner Bay, Okinawa; Bangkok, Thailand; Sasebo, Yokosuka, and Kobe, Japan; and Hong Kong, B.C.C. She returned to San Diego on 27 June and resumed local operations. She remained so employed for the rest of 1970 and throughout 1971.

Salmon departed San Diego on 17 February 1972 on her eighth deployment to the western Pacific. In April, she rescued survivors from the Japanese coastal freighter, Koei Maru #2 which sank about 30 miles south of the entrance to Tokyo Bay. In July, she joined units of the Royal Australian Navy and Air Force in an antisubmarine warfare exercise. Salmon departed Pago Pago on 13 August and re-entered San Diego on the 26th.

She remained on the west coast for the remainder of 1972 and for the first five and one-half months of 1973. On 16 June, she headed west for what was to have been her ninth deployment to the Far East. Upon her arrival in Pearl Harbor, the deployment was cancelled due to damage to her number three and number four main engines. On 10 August, she sailed back to San Diego to prepare for overhaul. Salmon entered Mare Island on 17 November and commenced overhaul nine days later. As of mid-June 1974, she is still at Mare Island.


Add Your Name to the
SS-573 Crew Roster