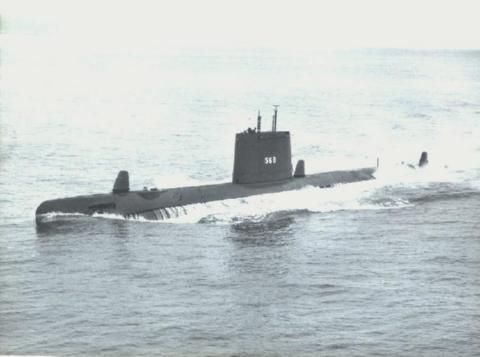 After shakedown out of Newport R.I. Harder made a 1 000-mile submerged passage from New London Conn. to Nassau Bahamas while snorkeling. She then engaged in tests out of New London to evaluate fast attack type submarines. As a Tang-class attack boat Harder belongs to the first new type of submarine built after World War II. Her design which incorporates many of the lessons learned in wartime operations includes a snorkel breathing apparatus a stronger pressure hull and more powerful engines.

Harder began fleet operations out of New London in June 1953. During the next several years she carried out a schedule of training and readiness operations with ships of the Atlantic Fleet and Allied NATO nations. Operating from the North Atlantic to the Caribbean she engaged in sonar evaluation tests supported ASW tactical exercises and participated in submerged simulated attack operations. In March 1959 she participated in SUBICEX during which she cruised 280 miles beneath the ice packs off Newfoundland further than any conventionally powered submarine had previously gone.

After completing a 3 month advanced submarine exercise in the Atlantic Harder changed her home port to Charleston S.C. where she arrived 17 November and joined Submarine Squadron 4. She continued operations in the Atlantic and Caribbean for more than a year then departed Charleston 24 May 1961 for deployment off the western coast of Europe and in the Mediterranean. After reaching Bremerhaven Germany 9 June she supported ASW operations with ships of the Federal German Navy. The following month she steamed via Holy Loch Scotland and Rota Spain to the Mediterranean where she supported peace-keeping operations of the mighty 6th Fleet. Harder returned to Charleston 28 August.

Training exercises and tests evaluating ASROC and other ASW systems kept Harder busy until she entered Charleston Naval Shipyard for overhaul in October 1962.

Ready for action in April 1963 she operated along the Atlantic Coast and in the Caribbean for the next 2˝ years polishing her underwater warfare tactics and operating with destroyer type ships as they worked on ASW exercises.

Harder again entered Charleston Naval Shipyard 22 October for a thorough overhaul and modernization in which she received an 18-foot extension to her hull a redesigned superstructure new engines as well as improved electrical and electronic equipment. Modernization completed early in 1967 Harder rejoined the fleet eager to face the challenge of more demanding service to the Navy and the Nation.


Add Your Name to the
SS-568 Crew Roster