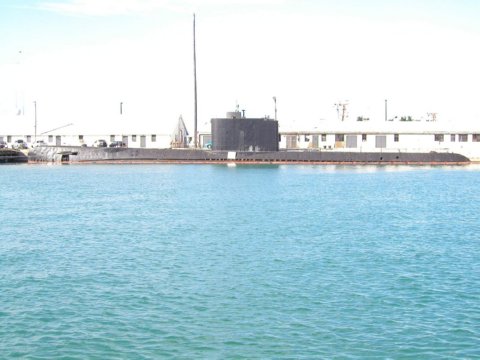 Trout operated out of New London as a unit of Submarine Squadron (SubRon) 10 from 1952 to 1959. During this period, she conducted training and readiness Operations with ships of the fleet and NATO nations, operating from the North Atlantic to the Caribbean Sea. She engaged in sonar evaluation tests, practice ASW exercises, and submerged simulated attack exercises. During submerged exercises in polar waters in company with Harder (SS-568), Trout sailed 268 miles beneath Newfoundland ice floes, setting a distance record for conventionally powered submarines.

In August 1959, Trout shifted her home port to Charleston, S.C., where she was assigned to SubRon 4. She was deployed to the 6th Fleet in September 1959 for her first Mediterranean cruise. Four months later, while returning home, she represented the United States at Bergen, Norway, during the 50th anniversary celebrations commemorating the birth of the Norwegian Navy's submarine arm.

In February 1960, Trout performed as a test bed for Bureau of Ships shock tests. She won her first Battle Efficiency "E" award in 1961. In early 1963, the submarine rendered services for the Operational Test and Evaluation Force before commencing a six-month overhaul at Charleston in July of that year.

During the remaining years of the 1960's, Trout made three more Mediterranean deployments as a unit of the . 6th Fleet. Between deployments, she participated in training and developmental exercises off the east coast and in the Caribbean. In July 1970, she was assigned to the Pacific Fleet.

After returning from her second WestPac deployment to San Diego on 29 January 1976, Trout operated off the west coast until receiving orders on 1 December changing her home port to Philadelphia. She was decommissioned and struck from the Navy list on 19 December 1978.


Add Your Name to the
SS-566 Crew Roster