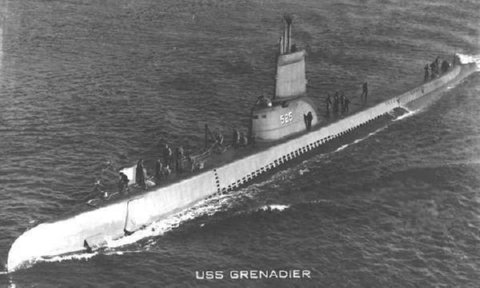 Final Disposition: Transferred to Venezuela 15 May 1973

The second Grenadier (SS-525) was laid down by Boston Naval Shipyard Boston Mass. 8 February 1944; launched [Vol. IV errata: launching 15 December 1944 but was not christened until] 10 February 1951; sponsored by Mrs. John A. Fitzgerald wife of the first Grenadier's last skipper; and commissioned the same day Comdr. Henry G. Reaves in command.

One of the first "Guppy" submarines Grenadier was equipped with a snorkel to permit indefinite running in an awash condition. Grenadier proved the worth of this device during her shakedown. Returning from the Caribbean cruise the new submarine made the 7-day voyage from Guantanamo Bay to New London Conn. submerged. Almost 2 years of intensive training exercises out of New London were capped by her first yard overhaul at Philadelphia extending from 16 December 1952 to 22 April 1953.

In June 1953 Grenadier participated in the annual midshipman cruise to Rio de Janeiro and other Brazilian ports. Returning to New London via the Caribbean she then supported ASW exercises during November as a carrier task force perfected its antisubmarine operations. Grenadier continued training and battle exercises along the New England coast and off the Virginia Capes and in August 1955 cruised to Montreal Quebec via the St. Lawrence River.

Grenadier departed New London 3 January 1956 on the first of several Mediterranean cruises. During a 3-month deployment she steamed throughout the Mediteranean [sic] and both showed the flag and participated in attack and antisubmarine exercises with various units of the 6th Fleet. On two subsequent Mediteranean [sic] deployments from 8 November 1957 to 27 January 1958 and from 10 April to 8 August 1962 she operated with the mighty 6th Fleet to bolster peace keeping operations in that troubled region of the world.

Between these cruises the submarine participated in exercises along the East Coast and was a frequent visitor to Caribbean waters. Grenadier operated out of New London until 15 September 1959 she transferred to Key West Fla. From there Grenadier served more frequently in the Caribbean and also patrolled and held exercises along the Atlantic and Gulf coasts of Florida.

While on special antisubmarine exercises in the North Atlantic on the morning of 29 May 1959 Grenadier in company with a patrol plane sighted and photographed a Russian submarine prowling the waters of Iceland. It was the first confirmed sighting of a Soviet submarine in the Atlantic.

Grenadier again confronted Russian ships when the Cuban missile crisis threatened nuclear war in October 1962. In company with Balao Threadfin Trutta and Chopper she formed part of the American fleet that blockaded and quarantined the Communist island. After the Russian offensive missiles were pulled out of Cuba Grenadier was one of several ships dispatched to Cuba in November to assert and confirm America's rights and position there.

Since 1962 Grenadier has continued patrols and training operations out of Key West. Assigned to SubRon 12 she has participated in exercises along the Atlantic coast and in the Caribbean. In addition she has provided valuable aid during the perfecting of advanced sonar and ASW equipment. She distinguished herself in 1966 gathering navigational data and other information in the Caribbean. She continues to serve the Atlantic Fleet into 1967.


Add Your Name to the
SS-525 Crew Roster