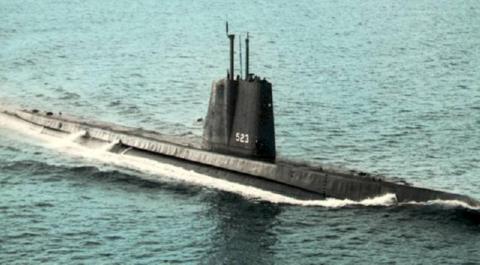 Final Disposition: Transferred to Brazil 13 May 1972

Built at the Naval Shipyard Boston Grampus (SS-523) was begun in 1944 but left uncompleted at the end of the war. Construction was resumed in 1948 and Grampus launched [Vol. IV errata: was christened] 26 October 1949 Mrs. Clark H. Woodward who also sponsored the previous Grampus sponsor. She commissioned the same day Comdr. George F. Sharp in command.

With her new snorkeling equipment which permitted her to remain submerged for periods far longer than the World War II fleet class ships Grampus served as a prototype for the "Guppy" class submarines and also incorporated many features to appear later in nuclear submarines. Attached to SubDiv 61 at Norfolk she has participated in a variety of exercises along the East Coast and in the Caribbean including torpedo and attack exercises snorkeling tests and demonstrations and antisubmarine training. Grampus also did a great deal of work with the early HUK (Hunter-Killer) antisubmarine patrols now a vital part of American defenses to whose development she greatly contributed.

From 5 January to 2 April 1955 Grampus proceeded independently to the Mediterranean where she "showed the flag" at Algiers Naples Barcelona Malta Beirut Monaco and Gibraltar before returning to Norfolk and her routine of exercises and tests spaced with regular overhauls at Portsmouth and Philadelphia. During the late 1950's and early 1960's Grampus operated out of Norfolk in the North Atlantic.

Under the command of Lt. Comdr. D. A. Kilmer Grampus sailed with Task Force "Alfa" for 6 weeks prior to 13 February 1964. On 3 April she deployed with the 6th Fleet in the Mediterranean Sea until 3 August.

She operated out of the Virginia Capes until entering Philadelphia Naval Shipyard in mid-April 1965 for overhaul. After refresher training and shakedown in the fall Grampus operated along the East Coast engaging primarily in ASW exercises.

She departed Norfolk 13 May 1966 for the eastern Atlantic and Northern European countries to participate in NATO ASW exercises. Back in Norfolk 30 August she resumed operations in the Virginia Capes area and Caribbean until sailing 29 December to Philadelphia for repairs in the naval shipyard. Shipshape again she resumed operations with the Atlantic Fleet.


Add Your Name to the
SS-523 Crew Roster