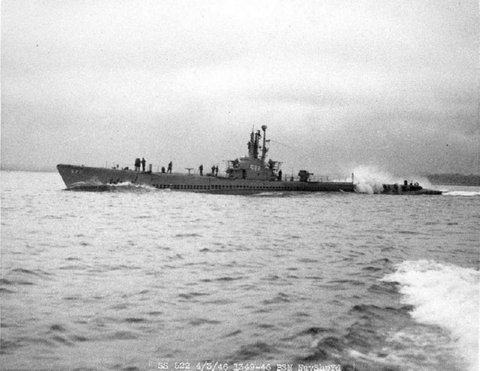 Following shakedown training in the West Indies and in the Gulf of Mexico Amberjack reported on 17 June for duty with Submarine Squadron (SubRon) 8. Operating out of the Submarine Base New London Conn. she conducted training missions in the Nor th Atlantic and in November 1946 made a cruise above the Arctic Circle. In January 1947 the submarine entered the Portsmouth (N. H.) Naval Shipyard for extensive modifications and thereafter spent about a year undergoing a "Guppy" II conversion (from greater underwater propulsive power) during which her hull and sail were streamlined and additional batteries and a snorkel were installed to increase her submerged speed endurance and maneuverability. In January 1948 she reported for duty with SubRon 4 based at Key West Fla. She operated along the east coast and in the West Indies for a little more than 11 years. Her schedule included the development of tactics and independent ship exercises type training periodic overhauls and fleet exercises. Dur ing this period she also visited numerous Caribbean ports. In July of 1952 Amberjack was transferred to the newly established SubRon 12 though she remained based at Key West and her employment continued as before.

Early in August 1959 after more than 11 years of operations out of Key West the submarine's home port was changed to Charleston S.C. She arrived there on the 8th and reported for duty with her former squadron SubRon 4. While working out of her new hom e port Amberjack's operations remained much as they had been before with one significant difference: she began making deployments to European waters. In August September and October of 1960 the submarine participated in a NATO exercise before m aking a week-long port visit to Portsmouth England. She returned to Charleston late in October and resumed her normal routine. Between May and September of 1961 the warship deployed to the Mediterranean Sea for duty in the 6th Fleet. After a three-year interlude operating along the east coast and in the West Indies Amberjack made another Mediterr anean cruise between 7 July and 1 November 1964. She spent the ensuing 29 months working out of Charleston. In 1967 the submarine made a three-month deployment to the Mediterranean between 24 April and 24 July. On 2 September 1969 following another 25 mo nths of operations along the east coast and in the West Indies she embarked upon her last Charleston-based tour of duty in European waters during which she participated in another NATO exercise with units of the British Canadian and Dutch navies. At the conclusion of the exercise Amberjack visited a number of ports in northern Europe before returning to Charleston on 12 December 1969.

On 9 July 1970 Amberjack arrived in her new home port Key West her base for the remainder of her service in the American Navy. She made her last deployment to the Mediterranean between 27 November 1972 and 30 March 1973. On 17 October 1973 Amberjack was decommissioned at Key West and her name was struck from the Navy list. That same day she was transferred to the Brazilian Navy and commissioned as Ceara (S-12). As of the end of 1984 she was still active in the Brazilian Navy.


Add Your Name to the
SS-522 Crew Roster