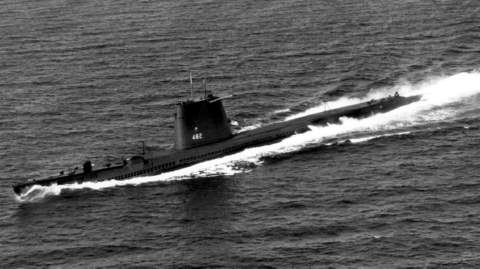 After shakedown in the New London area Irex sailed for the Pacific via the Panama Canal. While she was in the Canal Zone the war ended. Irex was ordered to Key West where she joined Submarine Squadron 4. She spent the remainder of the year there and at Guantanamo Bay conducting exercises. By December 1946 the Navy had completed plans for the modern telescopic snorkel (a device to enable diesel-powered submarines to run submerged for long periods of time) and Irex was ordered to Portsmouth for installation and test of this equipment. She spent July 1947 to February 1948 evaluating her new apparatus and then joined Submarine Squadron 8 at New London as the U.S. Navy's first operational snorkel submarine.

For the next 3 years Irex trained out of New London and off the Virginia Capes. In May 1951 she was assigned patrol duty in the North Atlantic and in August commenced operations out of Key West and Cuba. Returning to New London in the fall Irex continued her important training out of New England and in the Caribbean until 26 October 1953 when she sailed for the Mediterranean to join the 6th Fleet. Returning to New London 3 February 1954 Irex resumed her operations along the East Coast and in the Caribbean for the next 2 years.

Irex again deployed in 1956 to the Mediterranean with units of the powerful 6th Fleet. In the developing Mid-East crisis that culminated in the nationalization of the Suez Canal (July 1956) and armed conflict between Egypt and the forces of France Israel and the United Kingdom U.S. Naval forces acted early to support America's policy. In February patrols in the Red Sea and along the Israeli-Egyptian border were established as a means of expressing our interest in the peaceful outcome of the crisis. Returning to New London she resumed her operations and also served as training ship for submarine students.

During early 1957 Irex participated in fleet exercises and again served as training ship. In July she entered Philadelphia Naval Shipyard where she was fitted out with a new type plastic sail. The plastic sail which replaced the World War II conning tower is lighter in weight higher and acts as a stabilizer. With the exception of one tour to the Mediterranean (13 September-20 December 1958) and training cruises to Bermuda and Halifax Irex continued her operations out of New London for the next year and a half. In early 1960 she took part in fleet exercises in the North Atlantic before returning home 3 March. After operations out of New London and a training cruise to Halifax Irex deployed 1 August 1961 for submarine warfare training with the 6th Fleet in the Mediterranean. She returned to New London in November ranging south to Bermuda and north to New York and Boston as she trained reservists and men of the New London Submarine School. She based winter operations January to March 1963 from Puerto Rico and the Virgin Islands then was overhauled in the Philadelphia Naval Shipyard before resuming training at New London. In October 1963 she again sailed for the Mediterranean taking time out during this 6th Fleet tour to transit Suez Canal for CENTO exercises in the Red and Arabian Seas. She returned home mid-January 1965 to aid in the development of antisubmarine warfare tactics joined U.S.-Canadian warfare exercises reaching northward to Nova Scotia then returned home to New London in November 1965 and continued local training duties into 1967.


Add Your Name to the
SS-482 Crew Roster