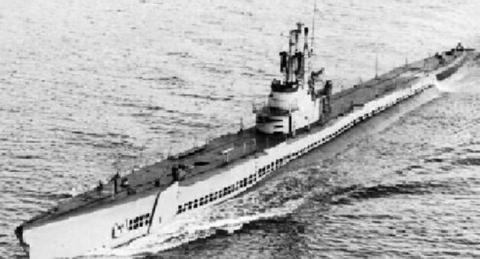 Following her completion on 26 December 1944, Toro participated in training exercises out of Portsmouth, Newport, and New London before arriving at Key West on 11 February 1945. She provided services to the Fleet Sonar School; then, on the 28th, departed Key West in company with Bumper (SS-333), bound for the Canal Zone were she underwent a week of intensive training. The two submarines set a westward course for Hawaii on 15 March and arrived at Pearl Harbor on 1 April. Toro conducted training exercises out of that port with Submarine Division 101 until 24 April when she departed Oahu in company with Billfish (SS-286). She arrived at Saipan on 6 May and, after one false start, got underway for her first war patrol on the 10th.

After arriving in her patrol and lifeguard area south of Shikoku and east of Kyushu on the 16th, she occasionally encountered Japanese planes as she pursued her duties. On the 18th, following a probable periscope sighting, Toro detected a transmission on Japanese submarine radar frequency and attempted to close the contact but was unsuccessful.

As she patrolled Bungo Suidp, she was often assigned as lifeguard for air strikes against the Japanese islands. While off Omino Shima before sunrise on the 25th, she received word that a B-29 was in trouble. She began the search in state four seas with only fair visibility and, two hours after dawn, homed in by friendly air cover, she rescued two Army aviators who had been floating in their lifejackets for three and one-half hours. Twenty minutes later, she rescued another aviator and then continued her search for additional survivors until late in the day. While patrolling on the surface on the following morning, she made radar contact with a possible target at 2,000 yards. The submarine turned toward the contact and shortly there after a torpedo wake crossed her bow, indicating that an enemy vessel had first located her. Toro dove and had no further contact with the unseen attacker. Toro continued patrols and lifeguard duty in Bungo Suido until 14 June when she set her course for the Marianas. She moored at Apra Harbor five days later.

Following refit by Fulton (AS-11), she got underway from Guam on 14 July; paused briefly at Saipan for fuel, water, and the replacement of her torpedoes with Mark 18's; and arrived in her patrol area on the 24th. Late in the day, she was drawn far out of her assigned area in a fruitless search for a downed flier. The departure of Toro's air cover at 1800 left her in a most dangerous situation due to the expected passage of an American task force on an antishipping sweep. Unable to clear the area in time, Toro made radar contact with the task force at 2055. Despite attempts to establish her identity, Toro was soon the target of two obviously unfriendly American ships which bore down on the submarine at a speed of 22 knots and bracketed her with gunfire at a distance of 7,400 yards. Toro attempted to establish her identity using a flare, smoke bombs, and sonar; but the ships were still firing when she passed 150 feet. The beleaguered submarine continued down to 400 feet and rigged for depth charges. The surface vessels, thinking that they had sunk a Japanese picket boat, remained in the area for half an hour searching for survivors without discovering that their target had been a friendly submarine. An hour after midnight, Toro surfaced and set her course back to her patrol area.

That morning, she returned to her lifeguard station and, in the afternoon, rescued three British aviators afloat on a raft. She maintained her station for carrier strikes against Japan on the 28th and, shortly after noon on the 30th, received a distress message from an Army Mustang plane. After circling his plane over the submarine the pilot parachuted from the crippled aircraft at an altitude of only 800 feet. Within seven minutes, Toro's crew brought the aviator on board.

She transferred the rescued British fliers to Gabilan (SS-252) on 1 August. On the 5th, while patrolling her lifeguard area for planes returning from bomber raids on the Japanese islands, Toro sighted dense black smoke on the horizon and, receiving reports of a downed pilot in the area, put on all possible speed to investigate the source of the smoke. Less than 20 minutes later, she picked up an Army aviator afloat in his lifeboat impressively marked by a smoke display. Minutes later, a second Army aviator jumped from his plane nearby, and again Toro had a flier on board within seven minutes of the time his parachute opened.

At mid-month, Japan capitulated. After destroying a number of mines south of Honshu, the submarine departed the area on the 17th and proceeded via Guam to Midway where she arrived on 27 August.

On 4 September, she departed Midway and proceeded via Pearl Harbor and the Panama Canal to east coast ports. She arrived at Philadelphia on 31 October to prepare for inactivation. In January 1946, ATR-67 towed the submarine to New London, where, on 7 February 1946, Toro was decommissioned and placed in reserve.

Toro was recommissioned on 13 May 1947, and she reported for duty to Submarine Squadron 2, Atlantic Fleet, on the 28th. She conducted hunter/killer exercises, made a simulated war patrol in the Arctic Sea, and joined fleet tactical exercises in the Mediterranean. On 28 January 1950, she joined Submarine Development Group 2; and her operations helped to refine submarine tactics, weapons, and equipment. She worked in the Atlantic and Caribbean until July 1952, when she reported to Submarine Squadron 2 at New London and assumed new duties training submariners. During the next 10 years, she combined these activities with type training and services to ships and aircraft engaged in antisubmarine warfare exercises. She also participated in Operation "Springboard" and made one Mediterranean cruise. She was redesignated auxiliary submarine (AGSS) in July 1962 and, on 22 November 1962, as her Navy career drew to its close, she made her 11,000th dive while operating in Long Island Sound.

In February 1963, she was ordered to berth with the Philadelphia Group, Atlantic Reserve Fleet, for demilitarization and non-industrial stripping; on 11 March 1963 she was decommissioned; and on 1 April 1963 her name was struck from the Navy list. She was slated to be sunk in an attempt to locate Thresher (SSN-593) (q.v.), but the plan was abandoned, and Toro was later sold and scrapped.


Add Your Name to the
SS-422 Crew Roster