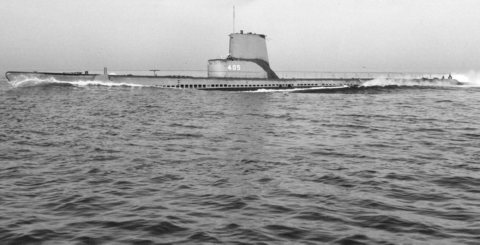 After shakedown off Portsmouth, N.H., and New London, Conn., Sea Owl transited the Panama Canal and arrived at Pearl Harbor on 23 October 1944. Her first war patrol commenced on 19 November and was conducted in the East China Sea as part of a coordinated attack group with Sea Poacher (SS-406) and Piranha (SS-389). After three weeks of searching for worthwhile targets, Sea Owl sank her initial victim, a Japanese escort destroyer. The remainder of the patrol was uneventful, and the submarine put into Guam on 15 January 1945.

For her second war patrol, Sea Owl joined Piranha and Puffer (SS-268) in patrolling in Luzon Strait and the South China Sea. She was off Wake Island early on the morning of 18 April and sent a Japanese submarine of the RO-35 class to the bottom. Her second patrol ended at Midway on 21 April.

Sea Owl got underway for her third and final war patrol on 20 May in concert with Puffer and Tirante (SS-420). This patrol was concentrated in the Yellow and East China seas and was devoted to both lifeguard duties and offensive patrol. After 19 days, two Japanese destroyers were contacted and six torpedoes were fired from a perfect set-up. The first torpedo hit one of the destroyers in her magazine amidships, blowing her up in the water and allowing the other torpedoes to pass under the target and miss. The other destroyer joined forces with two patrol craft and vengefully dropped 84 depth charges during the following 14 hours but inflicted no material damage. Four days later, Sea Owl, in a gun attack, destroyed a large, rice-laden, four-masted schooner from which she captured two prisoners of war. On 2 July, she rescued six downed aviators after a 135-mile race against darkness. All six were treated for wounds and were included in the crew for the remainder of the patrol.

When the Japanese surrendered on 15 August, Sea Owl was in Pearl Harbor preparing for her fourth war patrol.

Upon returning to the United States in September, Sea Owl was assigned to the Atlantic Fleet and was based at Balboa in the Canal Zone as a unit of Submarine Squadron (Sub Ron) 6. From October 1946 through March 1947, she made a cruise along the west coast of South America and joined the other submarines of SubRon 6 in fleet exercises off Culebra Island in the West Indies. She next supported antisubmarine training at Guantanamo Bay, Cuba, and Key West, Fla. Sea Owl underwent overhaul at the Philadelphia Navy Yard from September 1947 to January 1948 followed by a brief period of, refresher training in the Caribbean. She resumed her duties at Balboa on 12 January and, for the next 18 months, operated in the Panama area and Caribbean Sea participating in fleet training exercises.

On 27 June 1949, Sea Owl arrived at the Portsmouth (N.H.) Naval Shipyard for a regularly scheduled overhaul and, upon completion in October, was assigned to SubRon 8 in New London, Conn. For the next two years, she operated in the Atlantic participating in fleet exercises and antisubmarine training.

Sea Owl was converted to a fleet snorkel submarine in the Philadelphia Navy Yard from April to August 1951 and, for the next year, she participated in Atlantic Fleet exercises in the Caribbean area. Early in 1953, the submarine entered Charleston (S.C.) Naval Shipyard for overhaul and, unon completion, sailed to New London and then to the Caribbean as part of operation "Springboard." After returning to New London in March, she departed for her first tour of duty with the 6th Fleet in the Mediterranean participating in fleet exercises and in operation "Kevstone" and visiting France, Italy, Spain, Greece, and Turkey in a three-month tour.

Returning to New London in August 1954, Sea Owl spent the next two years in Atlantic and Caribbean waters training submarine school students and reserve personnel. After engaging in special operations in the late fall of 1956 and early 1957, the submarine resumed normal duties in the New London area until 1 September when she departed to engage in NATO exercises Fishplay and Strikeback in the northern Atlantic, returning to New London in October.

Sea Owl commenced 1961 with an extended upkeep period followed by local operations in the New London area. On 6 March, she departed for another Mediterranean tour followed by a scheduled overhaul in the Portsmouth (N.H.) Naval Shipyard.

After the 1962 Christmas holidays, Sea Owl departed for the Caribbean to take part in the second phase of operation Springboard including antisubmarine warfare exercises and visits to Puerto Rico and the Virgin Islands. Immediately following, she was engaged in a two-week antisubmarine warfare exercise with surface and air units of the Royal Canadian Navy in the vicinity of Berumda. In April 1963, she participated in exercise New Broom XI with joint forces of the United States and Canada. The remainder of the year consisted of submarine school operations and training exercises in the New London area.

On 7 July 1965, Seal Owl put to sea for a four-month deployment to the Mediterranean and, after returning to New London, engaged in local exercises for the remainder of the year.

Sea Owl spent 1966 providing services for the Submarine School and Operational Test and Evaluation Force in New London with time out for participation in operation Springboard in the Caribbean. During 1967, she participated in various fleet and training exercises; and, on 22 May, deployed to northern European waters for a training and good will tour, returning in July.

During a discharge physical examination, one of the crewman was discovered to have an active case of tuberculosis in an advanced stage. Due to the close environment and isolated atmosphere of the submarine, the crew was transferred to the United States Naval Hospital, St. Albans, N.Y., for three days of intensive tests. Following laboratory analysis, it was found that no other active cases existed, and the crew was returned to the submarine. Because of the unique living conditions of submarine life, Sea Owl served as a control group for clinical research for the Tuberculosis Service, Bureau of Medicine and Surgery.

On 30 June 1969, Sea Owl was reclassified as an auxiliary submarine (AGSS). She departed New London on 7 July for her final deployment to the Mediterranean. Upon return, the submarine was ordered to commence preparations for deactivation. On 15 November, after more than 25 years of dedicated service, Sea Owl was decommissioned and struck from the Navy list.


Add Your Name to the
SS-405 Crew Roster