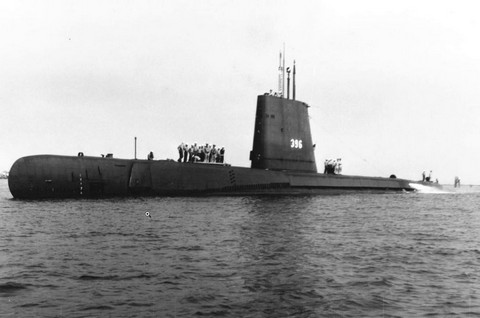 After shakedown off the New England coast, Ronquil sailed for Hawaii. She arrived at Pearl Harbor on 8 July 1944; and, after preparatory training, sailed on her first war patrol (31 July-8 September 1944) in the northeastern Formosa-Sakishima Gunto area. On 24 August the submarine sank two attack cargo ships: Yoshida Maru No. 3 (4,646 tons) and Fukurei Maru (5,969 tons). Ronquil's second war patrol, from 30 September to 28 November 1944, was carried out in two phases. She first operated with a coordinated submarine attack group in the Bungo Suido area, and then joined six other submarines to carry out an antipatrol ship sweep off the Bonin Islands. On her third war patrol, from 1 January to 14 February 1945, Ronquil patrolled the Bonins and did lifeguard duty in that area for Army bombers hitting the Japanese home islands. Her fourth war patrol from 11 March to 23 April 1945, brought her no worthwhile enemy targets but resulted in the rescue of 10 Army aviators from a B-29 bomber downed between the Bonins and Japan. The submarine's fifth and last patrol from 19 May to 26 July 1945, took her into the East China Sea and the Yellow Sea.

The end of the Pacific war found Ronquil off Pearl Harbor, training for another war patrol. She returned to San Diego in the fall of 1945 and engaged in training exercises off the California coast.

In January 1947, Ronquil departed San Diego for her first peacetime western Pacific deployment. This patrol lasted 114 days and took the submarine to Tahiti, the Carolines, the Marianas, Japan, and the Yellow Sea. On her return to San Diego, she resumed local operations before beginning a 3-year period of intensive training in offensive and antisubmarine warfare, embodying lessons learned during World War II as well as new postwar developments.

Ronquil entered Mare Island Naval Shipyard in May 1952 for decommissioning and "Guppy" modernization. Her hull and sail were streamlined for greater submerged speed. She received new, increased-capacity batteries for underwater endurance, and a snorkel which enabled her to use her diesels at periscope depth. New electronics, including improved sonar and fire-control systems, were installed. Ronquil recommissioned 16 January 1953, and on 12 June departed for Japan. She arrived at Yokosuka before sailing on to Tokyo 19 July to take part in the "Black Ship Festival" commemorating Commodore Perry's opening of Japan in 1852. Through August and September, Ronquil participated in antisubmarine and other operations in the waters near Japan; this was to set the pattern for most of her later deployments.

On 11 December 1953 Ronquil returned to San Diego for a year of overhaul, refresher training, Naval Reserve training, and fleet exercises. She sailed for a second western Pacific tour on 21 March 1955, returning late in September. The next 2 years were devoted to operations off the west coast of the United States; on 31 July 1957, the submarine again deployed to the Far East for 7 months.

From 3 to 7 July 1958, Ronquil took part, with other ships of the fleet, in an observance of the 50th anniversary of the arrival of the "Great White Fleet" at San Francisco. She resumed normal operations, then sailed from San Diego on 6 April 1959 for a 5-month "WestPac" deployment. During July and August of 1960, she participated in extensive antisubmarine exercises in the eastern Pacific with United States and Canadian forces. In the early fall of 1961 Ronquil again sailed for the Far East, returning in March 1962. After taking part in a demonstration of antisubmarine operations for the national radio and television networks, she began a period of overhaul and local operations. The submarine departed San Diego in November 1963 for duty with the 7th Fleet; on her return to California, she again resumed operations off the west coast. Late in 1964 Ronquil began preparations for deployment to the Vietnam area. In February 1965 she sailed for Southeast Asia and a 5-month deployment.

In mid-1966, Ronquil rejoined the 7th Fleet, returning to San Diego in February 1967 for further work off the coast of California. This was interrupted in August, when Ronquil provided services during the filming of the motion picture "Ice Station Zebra."

On 26 December the submarine was again underway for Japan. During this deployment, she took part in exercises with United States, British, Japanese, Australian, and Canadian forces. On 2 July 1968 Ronquil returned to the west coast. Ronquil departed for the Far East 4 July 1969, returning to San Diego on Christmas Eve.

At the end of January 1970 Ronquil began a period of repair and overhaul, followed by training and fleet exercises in the eastern Pacific. August 1970 brought another 7th Fleet deployment, which took her into the new year.

Ronquil was stricken from the US Navy Register on 1 July 1971 and transferred to Spain the same day. Renamed Isaac Peral (S-32), the submarine served the Spanish Navy until being stricken in 1982. Ronquil earned six battle stars for World War II service.


Add Your Name to the
SS-396 Crew Roster