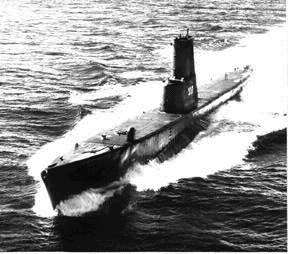 Final Disposition: Sunk as a target off Pearl Harbor 27 April 1975

Sailing from New London 21 March 1945 Carbonero served with the Fleet Sonar School at Key West and conducted torpedo exercises at Balboa C.Z. before arriving at Pearl Harbor 9 May. Her first war patrol conducted off Formosa from 26 May to 8 July was devoted to lifeguard duty standing by for possible rescue of aviators downed in carrier strikes. After refitting at Subic Bay Carbonero cleared for the Gulf of Siam on 4 August and cruising off the east coast of the Malay Peninsula sank four schooners two sampans and two junks some of the small remnants of the Japanese merchant fleet. This second war patrol ended with the cease fire order on 15 August and Carbonero put back to Subic Bay.

reported at Seattle Wash. 22 September 1945 for operations on the west coast. After a simulated war patrol to the Far East early in 1947 she was assigned to the guided missile program as a control vessel operating out of San Diego and Port Hueneme Calif. Fitted to launch missiles in May 1949 and with a snorkel in 1951 Carbonero operated off Southern California and occasionally in the Hawaiian Islands. From 1952 to 1957 the submarine performed important service in the evaluation of the "Regulus" missile. Since 13 May 1957 her home port has been Pearl Harbor. From this base she made an Arctic familiarization cruise in 1957 and in 1958 and 1959-60 cruised to the Far East. She has assisted in the training of forces of the Republic of Korea and of Japan and called at ports of Japan and the Philippines during these deployments.

received one battle star for service in World War II. One of her two war patrols was designated as "successful."


Add Your Name to the
SS-337 Crew Roster