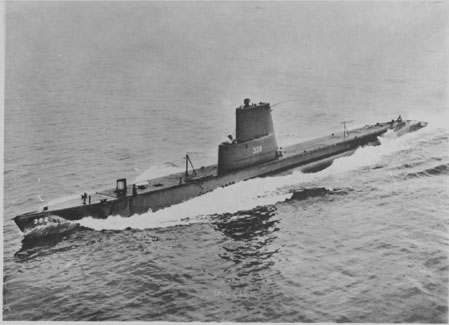 Pacific-bound Charr cleared New London 5 November 1944 and reached Pearl Harbor 9 December. On 30 December she was bound for action waters as she sailed on her first war patrol off the northeast coast of IndoChina. On 29 January 1945 daring to lie at anchor in broad daylight for 4 hours one mile off the coast Charr sent two men ashore in a rubber boat to rescue a downed aviator. A second rescue mission came at the close of her patrol when she escorted the badly damaged Dutch submarine HNMS Zwaardvisch through the Java Sea and Lombok Straits to Fremantle Australia where the two submarines arrived 3 March.

After refit Charr cleared on her second war patrol cruising in the Flores Java and South China seas and along the southern coast of Taiwan. She sailed for part of the patrol in coordination with Gabilan (SS-252) and Besugo (SS-321) and with them conducted an epic 4-day chase of the Japanese cruiser Isuzu and her three escorts. Finally early in the morning of 7 April 1945 Charr maneuvered into firing position to find Isuzu down by the stern and listing evidence of successful attack by Gabilan. Berlugo fired a spread of torpedoes scoring three hits to send the cruiser to the hottom.

Three days later 10 April 1945 Charr made contact with another target a coastal freighter which she sank on the surface by gunfire. The submarine then headed on for a dangerous assignment calling for intricate maneuvering when she laid a minefield off Pulo Island on 14 and 15 April. She put in to Subic Bay from 20 to 24 April to reload torpedoes then sailed on to patrol off Formosa on lifeguard duty during which she rescued one downed pilot.

After refitting at Subic Bay from 21 May to 14 June 1945 Charr put out on her third war patrol cruising in the Gulf of Siam with three other submarines. At this late date in the war targets were few for Charr 's sister submarines as well as air and surface forces had broken the back of Japan's navy and merchant fleet. The wolf pack however did find a target in the Japanese submarine I-351 on 15 July. After Charr and the other wolfpack members had aided in cornering the Japanese submarine Bluefish (SS-222) sent her to the bottom.

Charr remained at Fremantle from 26 July to 29 August 1945 then sailed for repairs at Pearl Harbor and training at Guam until 30 January 1946 when she reached San Diego her newly assigned home port. From this port she made simulated war patrols to the Far East in 1947 and 1948 operating along the west coast at other times. On several occasions she carried members of the Naval Reserve on 2-week cruises and assisted with training for briefer periods from 1949 through July 1951 when she entered Mare Island Naval Shipyard for a conversion which streamlined her appearance and equipped her with the snorkel thus enhancing her underwater cruising range. With her conversion completed 19 November 1951 she prepared for overseas deployment and on 26 March 1952 she sailed to support United Nations forces in Korea conducting patrols throughout the Far East. She returned to San Diego 2 October 1952 for local operations which continued to include occasional training cruises for the Naval Reserve.

Charr again cruised in the Far East from 11 June to 7 December 1954 training air and surface forces in antisubmarine warfare and conducting patrols. On 9 November she played hostess to Chiang Kai Shek on his first cruise in a submarine. Upon her return to the west coast she resumed her normal operating schedule and did not return to the western Pacific again until 22 March 1957 to 14 October 1957. A highlight of her next period of service was an exercise with ships of the Canadian Navy in the fall of 1958 which was followed by preparations for her 1959 Far Eastern cruise completed between 6 May and 28 October. Through 1960 she continued operations from San Diego.

Of Charr 's three war patrols the second was designated a "successful war patrol " for which she received one battle star.


Add Your Name to the
SS-328 Crew Roster