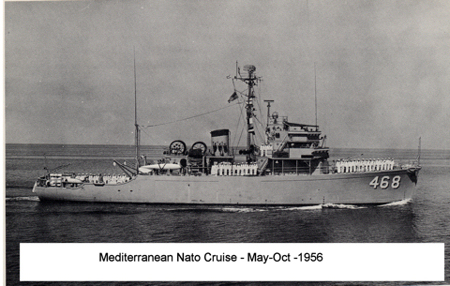 Redesignated MSO-468 in February 1955, Rival was assigned as flagship, Mine Division 85 during shakedown. In March 1955 she began operations out of her homeport of Charleston, S.C. Based there since that time, she has operated primarily along the east coast, rotating biennially, except for 1962, to the 6th Fleet in the Mediterranean. She has participated in Fleet and NATO exercises and, in 1966, in the successful search (20 February to 8 April) for a nuclear bomb lost off Palomares, Spain. During her operations with the 2d Fleet, she has conducted exercises in the Charleston area and off Puerto Rico and has provided services at Yorktown, Va. and at Mayport and Panama City, Fla. In 1961, she added Caribbean deployments to her schedule and continued them through the decade.

In December 1968, Rival returned from her last Mediterranean cruise of the 1960s. Through 1969 she remained in the western Atlantic and in the Caribbean. In 1970, she prepared for modernization. She arrived at the Todd Shipyard, Brooklyn N. Y., on 10 June to begin the work, however the contract was terminated 16 October 1970 for the convenience of the government. Rival, along with three other ships of her class, was towed to Philadelphia Naval Shipyard for storage pending final disposition. In August 1971, the four ships, including Rival, were sold to Mr. Charles Gural of Rohway, N.J. 14 October 2005


Add Your Name to the
MSO-468 Crew Roster