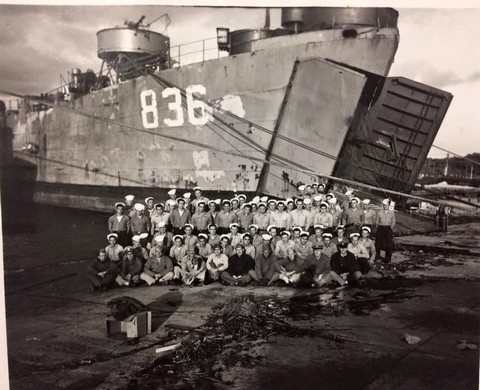 After shakedown off Florida LST-836 loaded ammunition lumber and cement then departed New Orleans 2 January 1945. She unloaded the cargo at Balboa C.Z. and proceeded to San Diego arriving on the 23d. In early February she sailed for Hawaii where she trained embarked troops then steamed to the Marshall Islands. Following 3 weeks of preparation in the Marshalls and Carolines the landing ship departed Ulithi 12 April for Okinawa. With the battle for this strategic hase well underway LST-836 arrived 6 days later; unloaded troops and equipment and returned Ulithi 29 April.

For the rest of the war she shuttled cargo and troops throughout the Pacific; then after VJ day was assigned to duty with the occupation forces in Japan. Returning to the United States LST-836 arrived San Francisco 19 January 1946 and remained on the West Coast until she decommissioned at Vancouver Wash. 25 July 1946.

Following 4 years in the Pacific Reserve Fleet LST-836 recommissioned at Bremerton 3 November 1950 Lt. Thomas J. McLaughlin in command. After refresher training she sailed for the Far East to aid United Nations forces in their struggle to stop Communist aggression in South Korea. Arriving Yokosuka 28 March 1951. the veteran landing ship was once again assigned to a battle zone and for the next 8 months shuttled cargo and troops between Japan and various Korean ports.

After a brief stateside overhaul in early 1952 LST-836 departed San Diego 24 July for operations in conjunction with the first hydrogen bomb tests in the Marshall Islands. From August to November she aided scientists as they tested this new source of power that will affect mankind in both war and peace. She returned to San Diego; then after a brief respite sailed 16 March 1953 for further duty in the still raging Korean conflict. Arriving Yokosuka 22 April LST-836 immediately commenced cargo runs from the staging areas to Inchon.

When the fighting ended LST-836 remained in the Far East to transport cargo to the United Nations peacekeeping force stationed in Korea. From 1954 to 1959 she made three Westpac cruises and participated in training operations along the West Coast. On 1 July 1955 LST-836 was named Holmes County.

Following a FRAM overhaul in late 1959 the landing ship was assigned to the Pacific Amphibious Force and for the next 5 years Holmes County engaged in amphibious exercises along the West Coast and in the Hawaiian Islands.

When Communist aggression continued as an external threat to the people of South Viet Nam the United States responded to preserve the freedom of the little Asian country. On 11 October 1965 Holmes County a veteran of two conflicts departed San Diego for operations in Southeast Asia. She arrived Da Nang South Vietnam 22 November and operated there for the rest of the year and into 1966. On 29 March 1966 after 89 days in the combat zone Holmes County steamed for Yokosuka Japan for upkeep before starting the 5 500-mile journey home. Holmes County received the following message from Commander 7th Fleet: "As you depart 7th Fleet Intra-Coastal Task Unit be assured you leave behind an admiration for the extraordinary work you have done this cruise."

On 26 May Holmes County arrived home. After serving in the San Diego area for 4 months she participated in Operation "Base Line" in October. This was one of the largest peacetime operations conducted by the Pacific Fleet.


Add Your Name to the
LST-836 Crew Roster