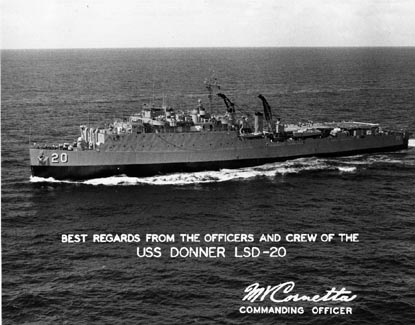 Donner transported landing craft from Norfolk to New York then operated boat pools along the east coast until 3 November 1946 when she sailed for the Mediterranean and similar duty. She returned to Norfolk 24 December for duty along the coast and on voyages to Argentia Newfoundland and Labrador.

From 31 January to 10 March 1948 she sailed in the Caribbean for a large scale landing exercise by the 2d Fleet. Donner was placed out of commission in reserve 12 August 1949.

Recommissioned 15 September 1950 Donner cruised to the Mediterranean for duty with the 6th Fleet between 5 March and 6 July l951. Operating from Norfolk she took part in training exercises in the Caribbean and made several cruises to the waters off Greenland for replenishment and cold weather operations. >From 17 July to 7 October 1956 she made two voyages from Norfolk to resupply the DEW line stations. Donner participated in the International Naval Review at Hampton Roads 12 June 1957 then sailed for the Mediterranean 28 August for NATO landing exercises in Turkey. She returned to Norfolk 8 February 1958 and resumed training operations there and in the Caribbean. Donner prepared for deployment to the Mediterranean during the Lebanon landings but her orders were canceled when the crisis eased. During the summer of 1959 Donner took part in Operation "Inland Sea " the historic first passage of a Navy task force into the Great Lakes through the newly dedicated Saint Lawrence Seaway. Between 7 January 1960 and 14 June she again served in the Mediterranean with the 6th Fleet.

On 18 June 1960 she entered Norfolk Naval Shipyard for overhaul and modernization which continued through December 1960.


Add Your Name to the
LSD-20 Crew Roster