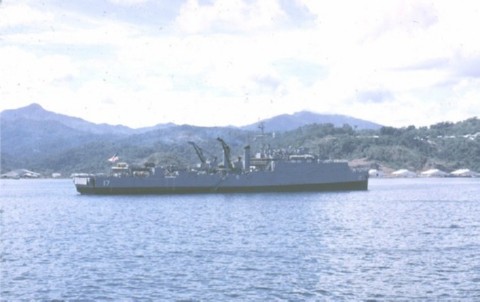 Catamount sailed out of Pearl Harbor 16 June 1945 laden with landing craft for Guam and Eniwetok. Through the remainder of the war she ferried landing craft dredges and other equipment from Espiritu Santo to Kwajalein Guam and the Philippines. On 19 August she cleared Guam with special equipment to be used in the occupation of Japan and on 26 August she stood up Tokyo Bay. Here she operated a boat pool and tended landing craft until 6 October when she cleared on the first of two voyages to Manila to ferry troops and boats for the Japanege occupation. After a final voyage from Guam to Samar Catamount cleared for San Francisco and Norfolk where she arrived 11 February 1946. Joining the Atlantic Fleet Catamount took part in amphibious training and midshipman cruises until the outbreak of the Korean Conflict.

Leaving Norfolk 15 August 1950 Catamount called at San Diego en route Kobe where she embarked marines bound for the magnificently planned and executed invasion of Inchon. In the landings at Wonsan Catamount sailed with the important repair and salvage group. It was in November 1950 at Chinnampo port city of Pyongyang that Catamount achieved a notable first when she became the first LSD to take part in minesweeping operations. It was essential that this port be opened so that the advancing Army ashore could be supplied by sea and all types of minesweepers were summoned for the urgent task. Catamount served as tanker and supply ship to this varied fleet as well as mothering a swarm of LCVP's which were able to sweep waters too shallow for larger craft.

In December Catamount took part in the skillful withdrawal of marines and soldiers from Hungnam to Pusan then returned to Yokosuka to replenish. She returned to tend landing craft at Korean ports through April 1951 when she began duty transporting equipment and supplies from Sasebo to Inchon and Pusan. On 31 May she cleared Yokosuka for an overhaul at San Diego.

Catamount had two more tours of duty in the Korean War from 3 November 1951 to 24 July 1962 [1952?] and from 29 October 1952 to 8 April 1953. She made her first post-war tour from 5 August 1953 to 18 April 1954. During each of these tours she tended small craft and transported personnel as well as taking part in exercises off Japan and Okinawa. From her base at San Diego she conducted local operations and in the summer of 1954 made two voyages to Naknek Alaska with landing craft and oil barges.

On 3 January 1955 Catamount cleared for the Far East once again arriving at Yokosuka 25 January. Almost at once she sailed for the Taiwan Straits to take part in the evacuation of the Tachen Islands early in February. She returned to San Diego 24 April. After local operations she spent 16 January to 30 August 1956 in the central Pacific in Operation "Redwing " a nuclear test. In the summer of 1957 Catamount sailed from Seattle Wash. on resupply missions to stations of the Distant Early Warning Line in the Arctic. From 12 June to 8 December 1958 she cruised in the Far East once more returning for duty off the coast of southern California. Among her assignments was qualifying helicopter pilots in landings on ships of her type and participating in amphibious landing exercises based on the relatively new concept of vertical envelopment. Special operations off the northwest coast of the United States and British Columbia in the spring and summer of 1959 preceded a deployment to Hawaii for amphibious training. Later in the year she was overhauled in Portland Oreg. returning to operations from San Diego 25 March 1960. After a brief period of operations and supplementary overhaul in San Diego Catamount sailed on 25 June on a special mission carrying landing craft to southern Chile devastated by earthquakes. Transferred to the Chilean Navy these landing craft provided critically needed transportation in regions where piers had been destroyed by tidal waves. Catamount returned to San Diego on 13 August operated on the west coast and on 22 November sailed for another tour with the 7th Fleet in the Far East.


Add Your Name to the
LSD-17 Crew Roster