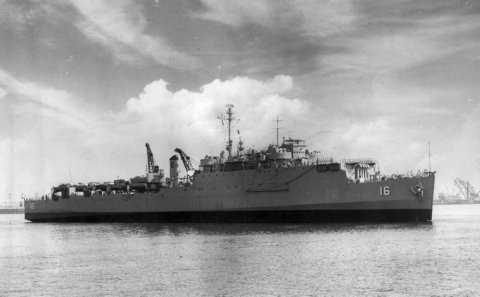 Cabildo sailed from New York City 6 May 1945 for Pearl Harbor where she arrived 8 June. She carried out her duties of docking and repairing small craft transporting amphibious craft and operating boat-pools at Guam and Okinawa in July. After carrying boats to the Philippines in August Cabildo reported in Wakanoura Wan Honshu on 11 September. Here she loaded Javanese Dutch and Australians rescued from Japanese prison camps who she carried to Okinawa. Laden with men of the Army Engineers she arrived at Manila 3 October then sailed for Japan where she acted as receiving and repair ship at Sasebo and Yokosuka until 19 April 1946.

Cabildo returned to the west coast 12 May 1946 and was decommissioned 15 January 1947. Recommissioned at San Diego 5 October 1950 she took part in atomic weapons tests in the Marshalls and on 21 November 1951 sailed from San Diego for duty in Korean waters. She lifted soldiers and marines from Japan to Korea and from Korea's east coast to the Inchon battle lines and during a part of her tour served as flagship and tender to Mine Squadron 3 in its dangerous operations. While with this group in April off Wonsan Cabildo received a direct hit from a shore battery but suffered no casualties and was able to continue her mission.

Returning to San Diego 2 September 1952 Cabildo prepared for another extended Far Eastern deployment from 3 July 1953 to 23 April 1954. In 1955 she was fitted with mezzanine and helicopter decks and from that time operated extensively with Marine units in developing the vertical envelopment concept of amphibious warfare. Cabildo's west coast operations alternated with two tours of duty in the Far East from January 1956 to July 1958. Clearing San Diego on 11 February 1959 she carried craft and an underwater demolition team detachment to the Aleutians before continuing to Japan. After duty in Japanese and Formosan waters she returned to Long Beach 5 June 1959. Amphibious exercises at Okinawa highlighted her 1960 deployment which began 16 February and continued through the major portion of the year.


Add Your Name to the
LSD-16 Crew Roster