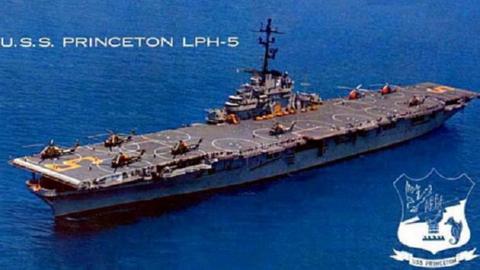 The USS PRINCETON (LPH-5), an Essex-class aircraft carrier, was commissioned on 18 NOV 1945, too late for action in world War II. At first with the Atlantic Fleet and then with the Pacific, PRINCETON steam on post-war deployments and then was decommissioned on 20 JUN 1948 and placed in reserve. Twenty six month later, in August 1959, PRINCE was recommissioned and off Korea by December. She made three combat deployments to Korean waters. In the 1950s she was successively classified as CV-37 - CVA-37 - CVS-37 and then LPH-5, a helicopter landing platform ship in March 1959. She first appeared in Vietnam in 1962, and returned for combat deployments through the 1960s. As her twilight approached, PRINCETON recovered Apollo 10 in 1969. USS PRINCETON served her country as LPH-5 for for more than 10 years until decommissioned on 30 JAN 1970.


Add Your Name to the
LPH-5 Crew Roster