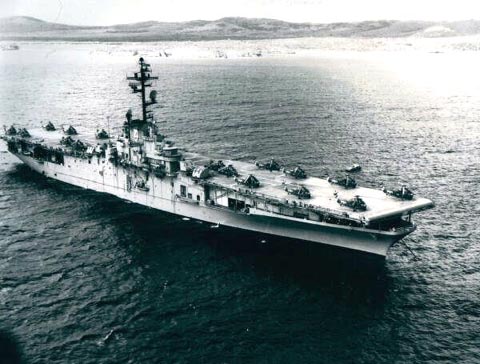 The USS BOXER (LPH-4), an Essex-class aircraft carrier, was commissioned on 16 APR 1945 as CV-21. Built by the Newport News Shipbuilding and Dry Dock Co. in Newport News, VA, USS BOXER was too late to see action in the Pacific in WWII. Deploying to the Far East after the War, BOXER went to sea with the first all jet powered operation in 1948. The Korean War had BOXER performing what is known today as a "surge" deployment, ferrying aircraft into the war zone and then remaining to support the Inchon landing in September 1950. Repeatedly returning to Korean waters during the conflict, BOXER continued on with more routine cruises to the Far East after hostilities ended. Reclassified repeatedly as CVA-21 (Attack Carrier), then CVS-21 (Anti-submarine Carrier), then when shifted to the Atlantic Fleet in 1959, as LPH-4, an Amphibious Assault Ship. BOXER conducted intensive training in the use of helicopter-born Marines as an element of Amphibious Warfare. On Atlantic fleet duty she successively participated in the Cuban Missile Crisis, the Dominican Republic Intervention and the recovery of Apollo spacecraft. The growing involvement of the US in Vietnam called BOXER to carry the US Army 1st Cavalry Division (Air Mobile) to Vietnam in 1965. USS BOXER served her country for 24 years, 7 months and 15 days, until decommissioned on 1 DEC 1969. The hulk of the BOXER was sold for scrap in 1971.

Final Disposition: Sold for scrapping in February 1971 and scrapped at Kearny

Boxer departed San Diego for her second Korean tour 2 March 1951. Again she operated with TF 77 supporting the ground troops. She returned to San Francisco 24 October 1951. Sailing 8 February 1952 for her third tour in Korea Boxer again served with TF 77. During 23-24 June her planes took part in the heavy strikes against the North Korean hydro-electric complex and on

5 August she had nine men killed and two seriously injured in a fire which swept the hangar deck. After emergency repairs at Yokosuka Japan (11-23 August) Boxer returned to duty off Korea. She arrived at San Francisco 25 September and underwent repairs until March 1953.


Add Your Name to the
LPH-4 Crew Roster