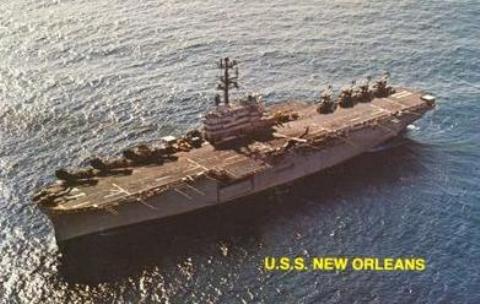 The USS New Orleans (LPH-11) keel was was laid on 1 March 1966 at the Philadelphia Naval Shipyard in Philadelphia, Pennsylvania. She was launched on February 3, 1968 and commissioned on November 16, 1968 with Captain G.M. Even in command.

After acceptance by the US Navy, USS New Orleans deployent to the Far East - Viet Nam area of operations in August 1969 to March 1970. Then in August 1970 she was supported President Richard Nixon's visit to Puerto Vallarta, Mexico. New Orleans next recovered Apollo 14, with astronauts Alan Shepard, Stuart Roosa, and Edgar Mitchell on February 9, 1971.

USS New Orleans next deployed to South East Asia in May 1971 - November 1971. Followed by a maintenance and upkeep period, New Orleans made her third West Pac in July 1972 which included disaster relief efforts in the Philippine flood relief operations.

In 1973 New Orleans was designated as the control ship for Operation End Sweep - the removal of mines in North Vietnamese waters.

New Orleans routinely deployed to the Western Pacific, conducted training and underwent maintenance over the balance of her career. She was involved in the Space Craft recovery, was in the Indian Ocean during the Iranian Hostage Crisis and supported President Reagans visit to Bali, Indonesia. In January 1990 USS New Orleans deployed to the Persian Gulf as part of of Operation Desert Storm and Desert.

Decommissioned on 31 October 1997 and laid up at NISMF Suisun Bay, CA. New Orleans hulk was sunk, near Hawaii, on July 10, 2010 by multiple Missle and Laser Guided Bombs dropped by B-52s.


Add Your Name to the
LPH-11 Crew Roster