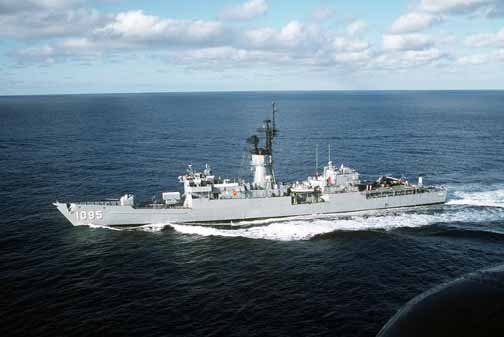 On 20 August, Truett departed Hampton Roads and headed for the West Indies. After arriving at Guan-tanamo Bay, Cuba, on 3 September, the ocean escort devoted the next six weeks to a feverish series of drills and exercises to prepare for duty in the Atlantic Fleet. On 8 October, Truett completed shakedown training and sailed for home. After a brief stop at St. Thomas in the Virgin Islands, Truett returned to Norfolk on 18 October.

Following local operations in the Hampton Roads area and repairs at the Norfolk Naval Shipyard, Truett got underway in April 1975 to conduct further tests and to train some 40 officers attending the Surface Warfare School. In May, she embarked her LAMPS helicopter and its detachment of officers and men. On 24 May, the ocean escort cleared Norfolk to participate in Exercise "Solid Shield." After nine days of hard work, she returned to Norfolk to prepare for a "Unitas" deployment. During her stay at Norfolk, the Navy re-classified the ship as a frigate on 1 July 1975 and redesignated her FF-1095.

Twenty days later, the frigate left Norfolk and set a course for the Panama Canal. En route, she conducted exercises with units of the Colombian Navy. Truett transited the canal on 8 August and headed down the western coast of South America. For the duration of "Unitas XVI," she trained with units of various South American navies, among which were those of Peru, Chile, Argentina, Uruguay, Brazil, and Venezuela. In the course of the deployment, she visited many ports and rounded Cape Horn at the southern tip of South America. After conducting exercises with the navies of the east coast nations of South America, she made a brief stop at Trinidad before returning home to Norfolk on 8 December. During the first two months of 1976, she resumed normal operations out of Norfolk.

Between 3 and 21 March, Truett participated in an ASW-and-convoy-operations exercise, "Safepass 76," with units of NATO's Standing Naval Force, Atlantic. Succeeding months were spent in preparation for the ship's forthcoming NATO deployment in the North Atlantic. Departing Norfolk on 14 June, Truett spent the next six months engaging in two major fleet exercises and visiting 20 ports from Norway to Portugal. The fleet frigate returned to Norfolk on 17 December and spent the remainder of the year enjoying a period of leave and a tender availability.

The greater part of 1977 was spent in priming the ship for deployment to the Mediterranean late in the year. During this workup period, Truett engaged in two major Atlantic Fleet exercises and underwent six inspections or qualifications. On 27 September, she departed for the Mediterranean and operations with the 6th Fleet which took her into the new year.

On 2 February 1978, Truett transited the Suez Canal and operated with the Middle East Force in the Red Sea and Gulf of Aden during the Ethiopian/Somalian crisis. Her operations there included a 56-day, continuous at-sea period. Returning to the Mediterranean in April, Truett arrived back in Norfolk on 25 April. The summer was spent conducting operations off the east coast, and the fleet frigate then proceeded to Braswell Shipyard, Boston, for a regular overhaul which commenced on 27 September. The ship remained there into 1979.