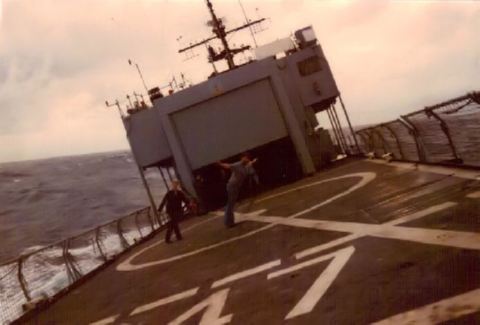 Final Disposition:Disposed of by scrapping dismantling 36910


Voge (DE-1047) was laid down on 21 November 1963 at Bay City, Mich., by the Defoe Shipbuilding Co.; launched on 4 February 1965; sponsored by Mrs. Alice Voge Getting, widow of Rear Admiral Voge; and commissioned at the Boston Naval Shipyard on 25 November 1966, Comdr. William F. Keller in command.

Voge remained at the Boston Naval Shipyard until 11 April 1967, completing her outfitting. On that day, she stood out of Boston, bound for her home port, Newport, R.I., whence she operated until mid-May. On 15 May, she departed Newport for her shakedown cruise, which lasted until 24 June and during which she operated out of Guantanamo Bay, Cuba. The ocean escort returned to Newport on 24 June and conducted local operations from there through the end of July. On 1 August, she reentered the Boston Naval Shipyard for her post-shakedown availability. That yard period occupied her for the remainder of 1967 and during the first two months of 1968.

In March 1968, she rejoined Escort Squadron (Cort-Ron) 6 at Newport and began duty supporting the development and testing of sophisticated antisubmarine warfare tactics and related equipment. Her operations out of Newport continued through the end of 1968.

In February 1969, she began preparations for a brief cruise to northern Europe to participate in a NATO exercise. She departed Newport on 1 April and made her first port call-Lisbon, Portugal-later that month, after conducting hunter/killer ASW exercises with ships of the Spanish and Portugese navies. From Portugal, she moved to Spithead, England, for a Royal review of the NATO Fleet in celebration of the 20th anniversary of the treaty organization. In late May and early June, she made port visits to Cherbourg, France; Edinburgh, Scotland; and Bremen, Germany, conducting further hunter/killer exercises when at sea between ports.

From Bremen, Voge headed back to Newport and, en route home, encountered a submarine contact later confirmed as a Soviet "Yankee-type" submarine. Voge successfully applied hold-down tactics on the Russian submarine and later received the Meritorious Unit Commendation for her efforts. Upon completing the usual post-cruise leave and repair period, the ocean escort resumed her duties out of Newport, practicing and testing ASW tactics and testing newly developed ASW equipment. Such a routine occupied her until August 1970 when she entered the Boston Naval Shipyard for her first regular overhaul.

The warship completed her yard period late in January and spent February completing post-overhaul sea trials. After gunnery exercises in the Virginia capes operating area early in March, she got underway on the 12th for her refresher training cruise to the Guantanamo Bay operating area. The ocean escort returned to Newport on 10 May and, after a tender availability, resumed operations in the Narragansett Bay area. She continued that routine until the following spring when she crossed the Atlantic for bilateral United States-Spanish ASW exercises and another with ships of the Portugese Navy. Voge returned home through very heavy weather and reentered Newport on 24 April 1972.

The ocean escort immediately began preparations for her first deployment with the 6th Fleet in the Mediterranean Sea. On 13 June, the warship began her voyage to Rota, Spain, where she arrived on the 22d. During the ensuing six months, Voge joined other ships of the 6th Fleet in a series of unilateral and bilateral exercises and made port visits throughout the Mediterranean. Of special interest were her visit to the Turkish Naval War College on Heybeliada Island in the Sea of Marmara in early August and her participation in the multinational NATO Exercise "Deep Furrow" late in September. In early November, she was assigned special duty shadowing Soviet submarines reporting to and leaving the Mediterranean.

On one occasion, she followed a departing Soviet submarine some 300 miles into the Atlantic before breaking contact and returning to the Mediterranean. On 10 December, she completed turnover to her relief, Du Pont (DD-941), and set course for Newport where she arrived on the 18th.

After completing the usual month of post-deployment leave and repairs, Voge resumed normal east coast operations in January 1973. That routine occupied her through most of 1973 and included two major exercises in March, a brief tour as destroyer school ship in April, participation in bilateral exercises with ships of the French Navy in June, and a midshipman training cruise in July. She received orders changing her home port to Mayport, Pla., on 15 August; and, four days later, she got underway for the south. She arrived in Mayport on the 22d and began local operations which kept her busy until near the end of the year.

Late in December, the warship began preparations to return to the Mediterranean. On 4 January 1974, Voge stood out of Mayport on her way to join the 6th Fleet. She arrived in Rota on the 14th and relieved Claude V. Ricketts (DDG-5) before joining Task Group (TG) 60.1 near Golfe Juan, France, on the 19th. Again, the warship joined units of the 6th Fleet and of Allied navies in a series of unilateral and bilateral exercises as well as in at least one multilateral exercise. She again made port visits all along the Mediterranean littoral before she departed Rota on 24 June, for home.

After reentering Mayport on 3 July, the ship devoted July to post-deployment leave and upkeep; and a tender availability in Mayport, preparatory to regular overhaul, took care of August. On 4 September, she departed Mayport and, the following day, arrived in Charleston. She entered the Charleston Naval Shipyard late on the 6th and commenced a 10-month overhaul. While at Charleston, she was reclassified a frigate and redesignated FF-1047 on 1 July 1975.

A fortnight later, Voge's overhaul was completed, and the frigate returned to Mayport. Refresher training and naval gunfire support exercises engaged her until October, at which time she returned to Charleston for a three-month restricted availability to correct problems in her main propulsion plant. Late in December, the warship returned to Mayport.

Voge remained at her home port until mid-February 1976 when she put to sea to participate in exercises conducted in the Caribbean with units of the Netherlands and British navies. Upon her return to port, the frigate began preparations for her third deployment to the Mediterranean. After a brief visit to Charleston, S.C., she departed that port on 14 April and headed for Rota where she arrived on the 26th. During much of that deployment, port visits all along the Mediterranean punctuated a series of training exercises conducted with units of the 6th Fleet and from foreign navies. Late in the deployment, she also resumed surveillance duties on Soviet naval forces operating in the Mediterranean. On 28 August, while operating in the Ionian Sea near Greece, she collided with a Soviet E-2-class submarine and sustained serious structural demage that necessitated drydocking at Toulon, France. On 7 November, Voge successfully completed post-drydock sea trials and then headed for Rota for turnover. On the 20th, she stood out of Rota bound for Mayport. The frigate reentered her home port on 2 December.

Voge spent almost all of the ensuing seven months in port at Mayport, putting to sea only to test the main propulsion plant. On 11 July 1977, she headed back toward Rota in company with Saratoga (CV-60) and Koelsch (FF-1049) for duty with the 6th Fleet. However, she soon was ordered back to Mayport because of contaminated potable water tanks and reached home on the 13th. On the 27th, the frigate got underway and, after an independent transit of the Atlantic, finally arrived in Rota on 3 August. Again port visits and exercises-unilateral, bilateral, and multilateral- kept her busy during that tour of duty in the "middle sea." On 12 December, she changed operational control back to the 2d Fleet at Gibraltar and headed back toward Mayport. The frigate arrived home two days before Christmas and began post-deployment stand-down.

Voge spent the first five months of 1978 engaged in training exercises out of Mayport. Early in June, she departed for the Bahamas where she provided services to submarines. The frigate then proceeded to Charleston to offload ammunition and continued on to Boston. On 12 July, Voge commenced a scheduled overhaul at Braswell Shipyard in South Boston which continued on into 1979.