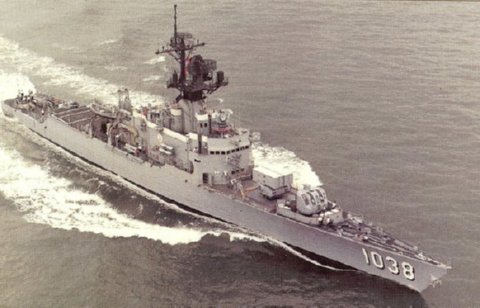 Following outfitting and shakedown McCloy, assigned to Escort Squadron 10, reported to her home port, Newport, R.I., in January 1964. In October, after further specialized training, she commenced training sonar technicians. Employed primarily as a schoolship throughout 1965, she also tested new ASW weapons systems for the Operational Test and Evaluation Force. During this period she enhanced her training and testing capabilities as well as her operational abilities by participating in joint United States‑Canadian exercises in the spring and fall and in ASW exercises at the end of the year.

In 1966 cruises saw her in the Bermuda area for NATO exercises (April); off the New England and Virginia coasts for convoy escort and ASW exercises (June, July, and August); and in the Caribbean for fleet tactical exercises (November‑December). From 16 January until 24 May 1967 she participated in Match Maker 11. This operation, which took McCloy from the Caribbean to northern Europe, was conducted jointly by American, Dutch, British, and Canadian ships. In what was called Cross Pollinization, McCloy men transferred to the Dutch destroyer Limburg (D‑814) and the British frigate Berwick (F‑115) while men of those ships came on board the American escort vessel.

McCloy spent the last half of 1967 and the first months of 1968 at Boston, undergoing overhaul. She got underway again in March and sailed south, the next month, for refresher training at Guantanamo Bay. Returning to Newport in June, she departed again 8 July for another extended cruise. On the 11th she arrived at San Juan where she joined naval units of the United States, Brazil, and Colombia for UNITAS IX. On the 15th, they commenced a clockwise circumnavigation of South America which first involved ships and planes of eight nations in exercises in the Atlantic, then around the Horn to the Pacific for more of the same, and finally through the Panama Canal back into the Caribbean before the end of the year. She continues her operations in the Atlantic into 1969.