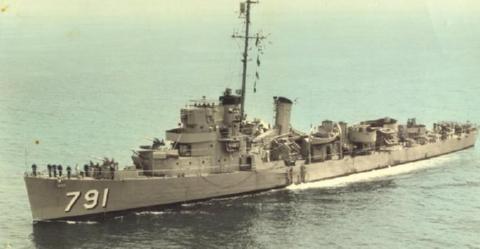 Maloy spent her entire World War II service with the Atlantic Fleet. On her first assignment she escorted troop transports to the Panama Canal and screened an escort carrier back to the east coast. Then in early March 1944 she crossed the Atlantic to Northern Ireland and until June conducted amphibious training along the English coast in preparation for the invasion of France.

On D‑Day, 6 June 1944, Maloy supported operations off Omaha Beach in this hard‑fought assault where naval gunfire support played a decisive role in victory. She continued to patrol off the Normandy coast and among the Channel Islands for the remainder of the war, raiding enemy shipping whenever possible. With the capitulation of Germany 8 May 1945, she escorted the first convoy to reenter St. Peter Port, Guernsey, Channel Islands. The destroyer escort then returned to the United States, arriving 18 June 1945.

The following May, Maloy commenced working for Operational Development Force, New London Detachment, and was redesignated EDE‑791, 14 August 1946. For the next 18 years Maloy played a large role in the ever‑changing Navy, primarily testing and evaluating experimental equipment in connection with various projects of the Underwater Sound Laboratory. While testing the new equipment, Maloy continued to fulfill regular duties, which included service as a school and training ship for the Fleet. Sonar School at Key West, and participated in antisubmarine warfare, convoy and other fleet exercises.

During this time she also successfully completed emergency assignments. At Portland, Maine, 11 November 1947 to 25 March 1948, Maloy provided electrical power for the city when, because of extreme drought conditions, local power companies could not draw on their normal power source, the lakes and rivers of the area. In May and June 1961, she cruised off the Dominican Republic to provide, if necessary, protection for American citizens during the revolution in that country. And the following year she provided support for the Cuban quarantine of October‑November.

For the next 2 years, Maloy continued her test and evaluation assignments. She decommissioned at Philadelphia 28 May 1965 and was struck from the Navy list 1 June 1965. On 11 March 1966, she was sold to the North American Smelting Co. of Wilmington, Del., for scrap.


Add Your Name to the
DE-791 Crew Roster